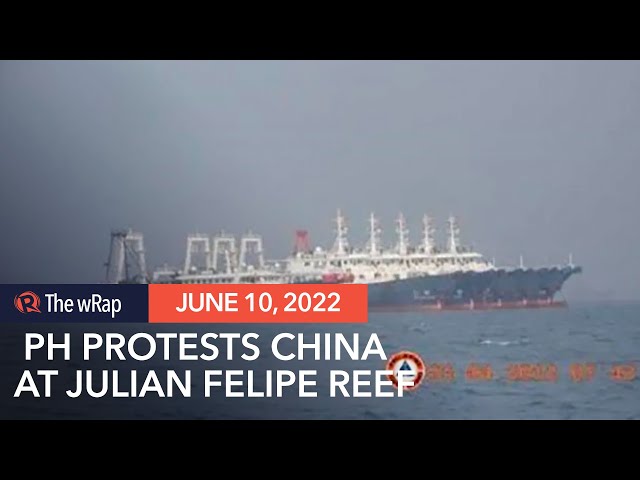 MANILA, Philippines – The Philippines said on Thursday, June 9, that it lodged a diplomatic protest against China, after over a hundred of its vessels were spotted back in waters “in and around” Julian Felipe (Whistun) Reef in the West Philippine Sea, citing these presence as illegal and in violation of international law.

In a statement, the Department of Foreign Affairs (DFA) said ships were spotted in the reef last April 4, nearly a year after a swarm of over 200 of its vessels were seen in the same area. That incident prompted Manila to beef up patrols, publicly call out Beijing’s actions, and file daily protests until the Chinese vessels cleared the area. Julian Felipe Reef, a boomerang-shaped shallow coral reef, is located northeast of Pagkakaisa Banks and Reefs (Union Reefs), about 175 nautical miles west of Bataraza, Palawan, placing it within the Philippines’ exclusive economic zone.

“The lingering unauthorized presence of Chinese fishing and maritime vessels is not only illegal, but is also a source of instability in the region,” the DFA said in a statement.

“Give it a rest, my friends,” added Foreign Secretary Teodoro Locsin Jr. in a tweet.

The Philippines’ response to the swarming of Julian Felipe Reef in 2021 – which China had described “unnecessary irritation” – had been backed by several countries including the United States, Japan, Australia, and United Kingdom, among others.

On Thursday, the Philippines pointed out that by allowing its ships to swarm Julian Felipe Reef, China’s action violated the 1982 United Nations Convention on the Law of the Sea (UNCLOS), the “final and binding” 2016 Hague ruling, as well as Beijing’s own commitments under the 2002 Declaration on the Conduct of Parties (DOC) in the South China Sea.

Under the DOC in particular, parties are urged to exercise “self-restraint.”

While China is a party to the UNCLOS and has pushed for a long-delayed sea code of conduct to succeed the DOC with Southeast Asian countries, it has continued to reject the arbitral award, saying the Philippines’ legal victory was “illegal and invalid.”

The Philippines, meanwhile, criticized China’s actions in the West Philippine Sea, pointing out that it took place in the same period President Rodrigo Duterte and Chinese President Xi Jinping held a telesummit on April 8, when both leaders affirmed “ their commitment to solve issues of mutual concern through peaceful dialogue, and exercise restraint in any and all endeavors relating to the South China Sea.” “The Philippines calls on China to comply with its obligations under international law, cease and desist from displaying illegal and irresponsible behavior, avoid further escalating tensions at sea and immediately withdraw all of its vessels from Philippine maritime zones,” the DFA said.

Under the Duterte administration, the Philippines has filed over 300 diplomatic protests against China.

Experts have long warned that the swarming of China’s vessels in the South China Sea, including the West Philippine Sea, was part of Beijing’s strategy to assert control over the seascape and push other countries’ vessels out of their own waters.

Back in March 2021, the National Task Force for the West Philippine Sea also said that ships lingering in Julian Felipe Reef were “believed to be manned by Chinese maritime militia personnel.”

Manila’s latest round of diplomatic protest come on the eve of The Shangri-La Dialogue, an Asian security summit organized by the Singapore-based International Institute for Strategic Studies. The summit, which attracts top-level military officials, diplomats, and weapons makers from around the globe, will be held June 10-12 in Singapore. – Rappler.com