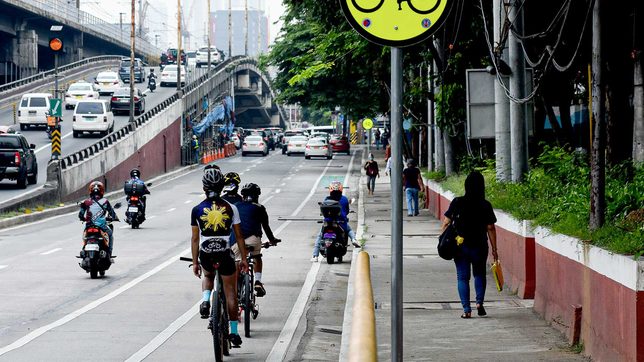 PANDEMIC. Bikers pass through EDSA during the morning rush hour on June 8, 2021.

Even as COVID-19 cases in the country continue to decline, the Philippines remained at the bottom in the latest global pandemic resilience ranking released by financial news outlet Bloomberg on Wednesday, October 27.

The Philippines scored 40.5, the lowest among 53 countries ranked by Bloomberg. This was the second time the country was at the cellar of the list. In September, it scored 40.2.

Bloomberg used the following indicators to rank the countries – vaccination coverage, virus containment, the severity of lockdowns, quality of healthcare, progress toward restarting travel, and the overall mortality throughout the pandemic.

“While other Southeast Asian nations also continue to be ranked low among the 53 economies tracked, the Philippines fares among the worst on vaccine coverage, with just 26% of the population covered amid challenges in bringing shots to areas outside of the big cities,” Bloomberg said.

Southeast Asian countries Indonesia, Malaysia, Thailand, Vietnam, and the Philippines were among the last six of the rankings.

Best performers in the the list were Ireland, Spain, United Arab Emirates, Denmark, and Finland. The United States and China placed 26th and 28th, respectively.

The Philippine government on October 7 expanded its vaccination coverage to the rest of the adult population, while nationwide rollout of the pediatric vaccination for those aged 12 to 17 will start on November 3.

Health Undersecretary Maria Rosario Vergeire said that the timing when the report was made was an important context at that time since the Philippines’ COVID-19 infections climbed record levels in September.