ASTRAZENECA VACCINE. President Rodrigo Duterte inspects one of the crates containing doses of the COVID-19 vaccine developed by British-Swedish drugmaker AstraZeneca at the Bulwagang Kalayaan in Villamor Air Base, Pasay City on March 4, 2021.

Facebook Twitter Copy URL
Copied
(UPDATED) This completes the initial supply of 525,600 vaccine doses promised to the Philippines by the COVAX global facility

Another 38,400 doses of AstraZeneca’s COVID-19 vaccine arrived in the Philippines on Sunday night, March 7.

The delivery of additional AstraZeneca shots follows the earlier arrival of 487,200 doses in the country on Thursday, March 4, and completes the initial supply of 525,600 vaccine doses promised to the Philippines by the COVAX global facility.

Philippine vaccine czar Carlito Galvez Jr and other officials from the Department of Health were present during the arrival of the vaccines.

The Philippines had earlier been told it would receive an initial 525,600 doses of AstraZeneca’s vaccine from COVAX on March 1, though this was stalled by logistical problems and supply concerns. The country finally received 487,200 doses on March 4, smaller than the initial number of shots promised, due to logistical and packaging constraints as part of its transport through a commercial flight.

The additional vaccine doses will allow more frontline health workers to get vaccinated as the Philippines reported over 3,400 cases on Saturday – its highest number of new infections in nearly 5 months.

Galvez said the government aims to vaccinate all 1.7 million health workers within March as experts fear a looming surge in cases with the presence of new variants, including the South Africa variant. 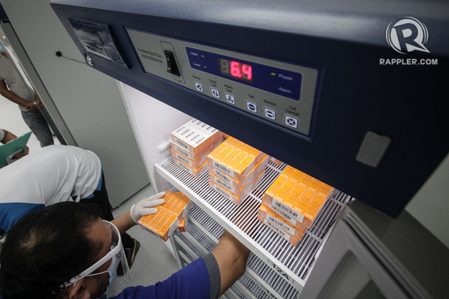 Experts said the South African variant called B1351 is more infectious than the original version of the virus and may have an impact on vaccine efficacy.

The Philippines’ daily positivity rate – or the percentage of all COVID-19 tests performed that are actually positive – also hit 9.16% on Wednesday, March 3, according to Rappler monitoring.