BIG DELIVERY. A shipment of over 2 million Pfizer vaccine doses from COVAX lands at the Ninoy Aquino International Airport on June 10, 2021.

The Philippines received its largest single delivery of vaccines so far on Thursday, June 10, with the arrival of 2.27 million Pfizer doses from the COVAX global facility.

The shipment of 2,279,160 Pfizer doses landed around 9 pm at Terminal 3 of the Ninoy Aquino International Airport. It is the country’s second batch of donated Pfizer vaccines, and brings the country’s total number of vaccines received to about 12 million.

The National Task Force for COVID-19 said vaccine doses would be brought to the Pharmaserv warehouse in Marikina City after arrival.

Both Cebu and Davao will receive 210,600 doses each from the latest delivery. The remaining doses will be distributed around Metro Manila and nearby provinces, where high numbers of infections were recorded and where the required ultra-low storage facilities were available.

Before the arrival of Pfizer doses on Thursday, the Philippines expected to receive the shots by end-May. Vaccine czar Carlito Galvez Jr had earlier announced that the shipment –  originally pegged at 1.1 million doses for June – was moved up to May after COVAX expressed the possibility of advanced delivery for the shots.

A “slip” in deliveries and erratic supply saw the Philippines’ 7 million doses expected in May fall short to 4.5 million instead.

The latest shipment of Pfizer doses is expected to boost the Philippines’ vaccine drive, where the shot is the second most-preferred brand among adult Filipinos, following China’s Sinovac. Additional supplies are also expected to ease operational issues faced by local government which have had to shut down several vaccination sites in recent days due to erratic and limited vaccine supplies. 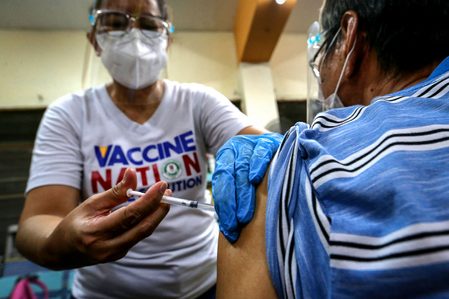 In the Philippines, Pfizer’s vaccine will be used for the first three priority groups in the government’s vaccine program: health workers, senior citizens, and persons with comorbidites. Individuals part of the indigent sector or A5 COVID-19 vaccine priority group will also have access to COVAX-donated vaccines.

Galvez and the Department of Health earlier said the allocation was done in keeping with the COVAX’ initiatives mandate that vaccines go to vulnerable sectors.

Meanwhile, vaccines purchased by the government will be used for both priority sectors and the A4 group comprised of economic frontliners. So far, the government has received vaccines bought from China’s Sinovac and Russia’s Gamaleya Research Institute, while its first shipment of Moderna vaccines is scheduled to arrive later in June.

The Philippines earlier secured 40 million doses of Pfizer’s vaccine, though no definite date of delivery has been announced. The signing of the term sheet with Pfizer is the last to be inked with seven vaccine developers comprising the Philippine government’s vaccine portfolio.

Apart from Pfizer’s vaccine, the Philippine expects to receive initial doses from Moderna, as well as more shipments from Sinovac, the Gamaleya Research Institute, and COVAX within June.

Since launching its vaccine drive on March 1, around 4.06% of the country’s population has received the first of two doses of a COVID-19 vaccine. Those who were fully vaccinated represent around 1.42% of the population as of June 6. – Rappler.com