The Department of Health office in Sta. Cruz, Manila on September 1, 2021.

Facebook Twitter Copy URL
Copied
The Department of Health says the move is part of an effort to 'streamline public communication.' Instead, daily updates will be made available on the agency's website every 4 pm. 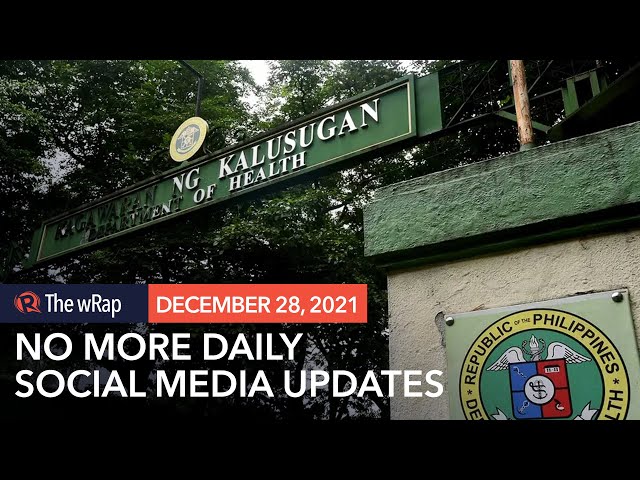 In an advisory on Monday, December 27, the DOH said the move was part of an effort to “streamline public communication.” Instead, updates will be reflected every 4 pm daily on the government’s official tracker hosted on the DOH’s website.

The DOH’s move to stop social media updates on the daily COVID-19 situation of the country comes as it continues to monitor the spread of the Omicron variant that has been sweeping across the world and driving fresh surges in cases in several countries.

So far, heath officials reported at least 4 Omicron cases as of Monday.

While it shifts away from reporting the daily COVID-19 situation on social media, health officials said it will continue to provide regular updated on the health crisis, usually done through press conferences streamed online.

The DOH’s social media updates on the COVID-19 situation included information like the number of new cases, recoveries, and deaths reported for the day. It also showed current number and status of active cases, the national positivity rate, as well s the status of bed occupancy both nationwide and in the National Capital Region.

Along with this, daily case updates were accompanied by notes detailing the impact of non-operational and non-reporting labs on testing output and case numbers, respectively. Health officials had also used daily social media updates to announce changes in recoveries and deaths that whose status were reclassified after further validation.

The following below shows a typical daily update, with accompanying notes, from the DOH:

It was not clear as of the moment if such details will be made part of the DOH’s COVID-19 tracker. Rappler has reached out to the DOH and will update this story once officials respond.

The government tracker currently has no details on non-operational labs and updates on validated recoveries and deaths available.

A recent survey from Pulse Asia conducted in September 2021, showed an increasing number of Filipinos go online to read, watch, and/or listen to news about the government at the national level.

The same survey found that a big majority of Filipino adults, at 63%, use the internet and that majority of them (59%) log on more than once a day. Of these, almost everyone (99%) log on to check their social media accounts. – Rappler.com