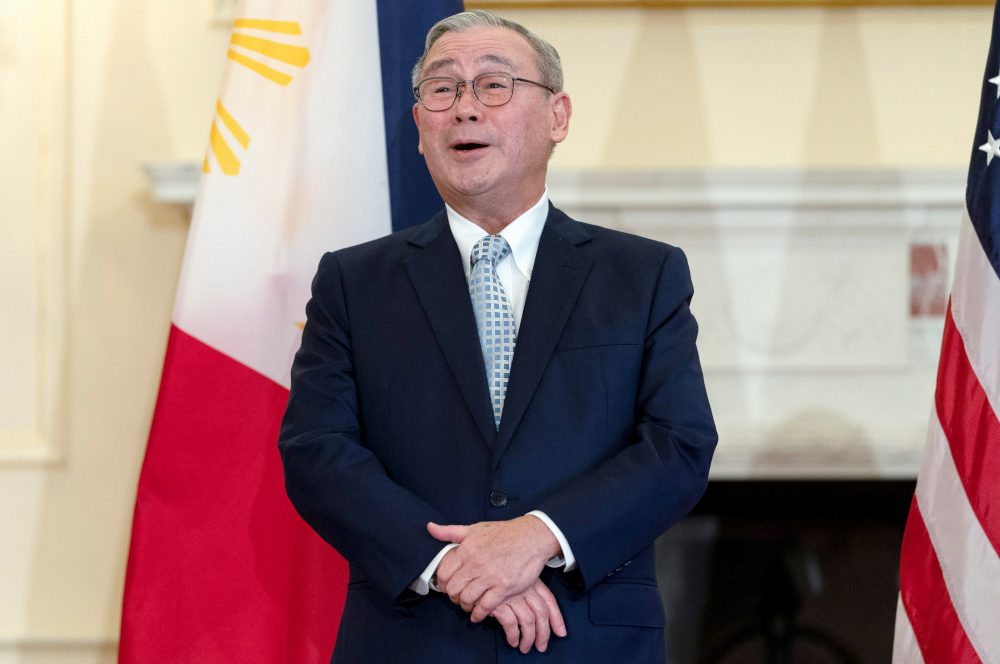 TEODORO LOCSIN. The Philippines' Foreign Secretary Teodoro Locsin speaks during a meeting with US Secretary of State Antony Blinken at the State Department in Washington, District of Columbia, USA, on September 9, 2021.

Facebook Twitter Copy URL
Copied
Known as AUKUS, the alliance will see Australia get technology to deploy nuclear-powered submarines as part of an agreement intended to respond to growing Chinese power

The Philippines is backing a new defense partnership between the United States, Britain, and Australia, hoping it can maintain the balance of power in the Indo-Pacific region, a view that contrasts sharply with some of its neighbors.

Known as AUKUS, the alliance will see Australia get technology to deploy nuclear-powered submarines as part of the agreement intended to respond to growing Chinese power. “The enhancement of a near-abroad ally’s ability to project power should restore and keep the balance rather than destabilise it,” Philippines foreign minister, Teodoro Locsin, said in a statement on Tuesday.

Locsin’s remarks, dated Sept. 19, differ to the stance of Indonesia and Malaysia, which sounded the alarm about the nuclear power submarines amid a burgeoning superpower rivalry in Southeast Asia.

Locsin said that without an actual presence of nuclear weapons, the AUKUS move would not violate a 1995 treaty to keep nuclear arms out of Southeast Asia.

The South China Sea continues to be a source of tension, with the United States – a defense treaty partner of the Philippines – and Western allies regularly conducting “freedom of navigation” operations that China has reacted angrily to.

China sees those as outside interference in waters it claims as its own, in conflict with other coastal states, like the Philippines and Vietnam, which have accused China of harassing fishermen and energy activities.

A brief period of rapprochement is all but over this year, with the Philippines furious about the “threatening” presence of hundreds of Chinese “maritime militia” vessels inside its exclusive economic zone.

“Proximity breeds brevity in response time; thereby enhancing an ASEAN near friend and ally’s military capacity to respond to a threat to the region or challenge the status quo,” Locsin added, without specifying the threat.

“This requires enhancing Australia’s ability, added to that of its main military ally, to achieve that calibration.” – Rappler.com