PROTECTION. Private health professionals in Pasig City receive a dose of AstraZeneca's vaccine during the first day of vaccination for medical, dental clinics and private health workers at the Pasig City Hall on Friday, March 26, 2021. 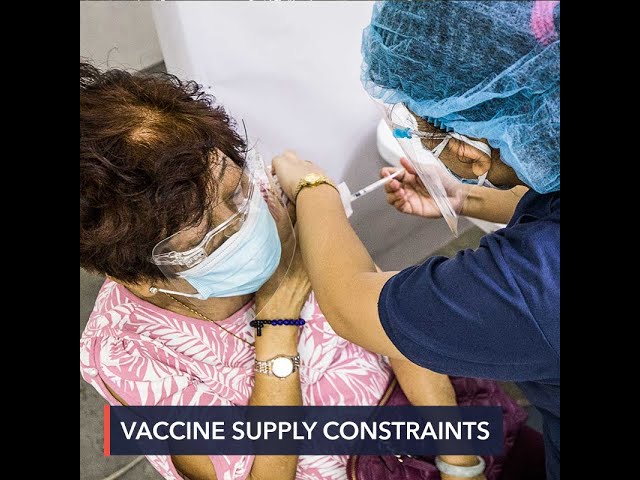 Facing supply constraints, the Philippines has reached out to the United States and the United Kingdom to request access to at least 6 million AstraZeneca doses from the countries’ excess stockpiles, vaccine czar Carlito Galvez Jr said on Wednesday, April 21.

“What we are doing right now is [negotiating] for us to have access to 3 million [from the US]. We are also talking with UK, we are also negotiating for 3 million access and most likely the COVAX, they told us AstraZeneca might be coming end of April or early May,” Galvez said in a joint hearing of the House trade and health committees.

Galvez said the Philippines is reaching out to the US since it had about 30 million doses of AstraZeneca’s vaccine doses on hand, while the shot had not yet been approved for emergency use in the country.

The UK, meanwhile, is a major source of AstraZeneca’s vaccine as the shot had been developed by the British drug firm and University of Oxford.

Galvez gave the information when asked if more AstraZeneca doses, initially expected to arrive in the Philippines by the end of March or April, would be available for health workers scheduled to receive their second dose of the vaccine sometime in May to June.

An initial 525,600 AstraZeneca doses arrived in the Philippines on March 4 and 7, while 979,200 more AstraZeneca shots were expected to be delivered from March 24 to 26. World Health Organization Representative Rabindra Abeyasinghe earlier said expected deliveries from COVAX were delayed due to a shortage of vaccines globally, but that doses were expected to arrive in the Philippines from April to May.

In a separate forum, Philippine Ambassador to the US Jose Manuel Romuladez said the US was looking at the Philippines’ request to access AstraZeneca doses, which could be given as a donation to the country.

“They are already looking at it and studying the possibility of being able to advance these vaccines for the Philippines. The last word I got from the State Department is that it’s already up for the committee or the one that’s in charge for vaccines here in the United States to see how they can help the Philippines, perhaps donate it even to us,” he said.

Romualdez declined to give more details on the status of the negations, adding that the US embassy in Manila’s Charge d’Affaires John Law was also pushing for the Philippines’ access to these vaccines.

Romualdez added that aside from the Philippines, others were also requesting for access to the US’ supply of AstraZeneca vaccine.

The Philippines’ House trade and health committees are probing the government’s vaccination program, which is behind its timetable of vaccinating 70 million Filipinos by the end of 2021 to achieve herd immunity.

The Philippines’ vaccine program has been hampered by supply constraints, with deliveries of doses arriving behind schedule.

Galvez told lawmakers that while the government has completed several contracts with vaccine manufacturers, timely access to vaccines was still dependent on the production timelines of drug firms. – Rappler.com