The deputy foreign ministers of Brunei, Malaysia, the Philippines and Vietnam are to meet in Manila on December 12 as part of Philippine efforts at pushing for a multilateral solution to their disputes, he told a news conference.

The talks exclude China, which claims most of the sea including waters close to the shores of its neighbours and has insisted its own disputes be solved bilaterally between Beijing and individual claimants.

"This is one of viable options to move the issue forward in terms of (arriving at) a peaceful solution," del Rosario said.

"We need to pay attention to the fact that there are many claimants and it has to be settled in a multilateral approach."

Also not invited to Manila is Taiwan, like China, claims most of the sea, which includes some of the world's most important shipping lanes and is believed to be rich in fossil fuels.

"We respect what (China) is suggesting, but we do not accept this," del Rosario said.

"We view the situation in the South China Sea as a threat to the stability and security in the region."

Rival claimants Brunei, Malaysia, the Philippines and Vietnam are all members of the 10-nation Association of Southeast Asian Nations (ASEAN).

Tensions have increased steadily over the past two years, with the Philippines and Vietnam accusing China of increasingly aggressive diplomatic tactics to stake its claims.

Del Rosario's announcement came just a day after he returned home from an regional summit in Cambodia that was overshadowed by the dispute.

Host Cambodia had said ASEAN leaders had agreed not to "internationalise" the disputes and confine the talks to those between the bloc and China.

Asked what the Manila meeting hoped to achieve, Del Rosario said: "If we can discuss limitation solutions to areas where we have disputes with each other, that certainly would be a good result to the initiative." 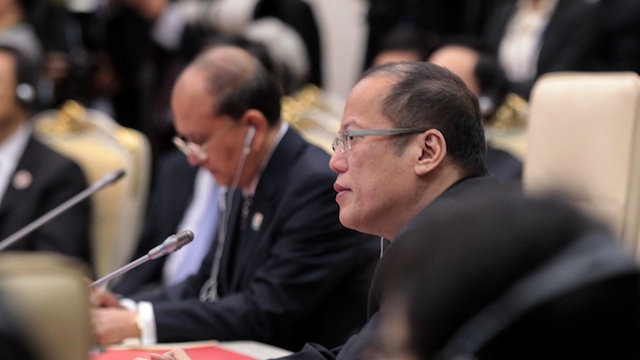 But Philippine President Benigno Aquino publicly rebuked Cambodian leader Hun Sen, saying no such consensus had been reached and that he would continue to speak out on the issue.

ASEAN chair Cambodia said that all 10 members of the bloc had agreed at a leaders' summit Sunday not to "internationalize" their disputes over rival claims to the South China Sea.

Aquino however insisted he and one other country, which diplomats said was Vietnam, had not agreed and that Hun Sen should not have promoted the alleged ASEAN "consensus."

Cabinet Secretary Jose Rene Almendras revealed that Aquino told Hun Sen: “We do not agree to that statement, and we reserve the right to protect Philippine sovereignty in any form, in any fora, anywhere in the world.”