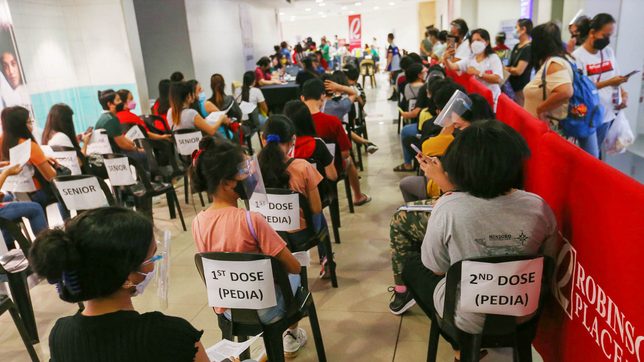 VACCINE DAY. Minors receive vaccineS against COVID-19 at a mall in Manila on December 1, 2021, the last day of the 3-day National Vaccination Drive.

The vaccine drive was held to push the country closer to its vaccination target of around 54 million Filipinos by December 31.

Vergeire was asked to assess the vaccine drive at a Laging Handa virtual briefing on Saturday, as local government units supposedly had yet to reach their own targets.

In response, the health official called the drive a “huge success,” saying that they overshot their target of 9 million individuals vaccinated.

Vergeire said the country was also able to reach its highest number of jabs in a single day: 2.82 million.

The nationwide vaccine drive was held amid fears of Omicron – named a new variant of concern by the World Health Organization – hitting Philippine shores. Travel bans covering South Africa, where the Omicron variant was first detected, and other African and European countries have already been put in place.

At the Laging Handa briefing, Vergeire said the Department of Health has not yet detected possible cases of the Omicron variant in the Philippines and cannot predict whether there will be a COVID-19 surge in January 2022, or after the Christmas holidays, without sufficient evidence.

A followup event for the nationwide vaccination drive is scheduled for December 15 to 17.

As of December 3, around 67.17% of the government’s target population have received their first dose of the COVID-19 vaccine, while 47.8% of the target have been fully vaccinated. – Rappler.com