Facebook Twitter Copy URL
Copied
Two strong volcanic tremors from Taal Volcano in Batangas are recorded at 4:36 am and 6:53 am on Thursday, August 12

The strong volcanic tremors were recorded at 4:36 am and 6:53 am at magnitude 2.6 and magnitude 4.1, respectively.

Based on the Phivolcs Earthquake Intensity Scale, Intensity II means the shaking is slightly felt by “few individuals at rest indoors” and “hanging objects swing slightly.”

“These events were accompanied by rumbling sounds as reported by residents of barangays Banyaga and Bilibinwang, Agoncillo, Batangas,” added Phivolcs in its bulletin on Thursday morning.

Overall, in the past 24-hour period, the Taal Volcano Network recorded 141 volcanic earthquakes. These include:

Aside from the volcanic earthquakes, upwelling or the rising of hot volcanic fluids continues in Taal Volcano’s Main Crater Lake.

Phivolcs said the upwelling generated 1,500-meter-high plumes, which drifted to the northeast and southwest.

Upwelling which generated a steam-rich plume had also been observed on Wednesday, August 11, as shown in the video below. 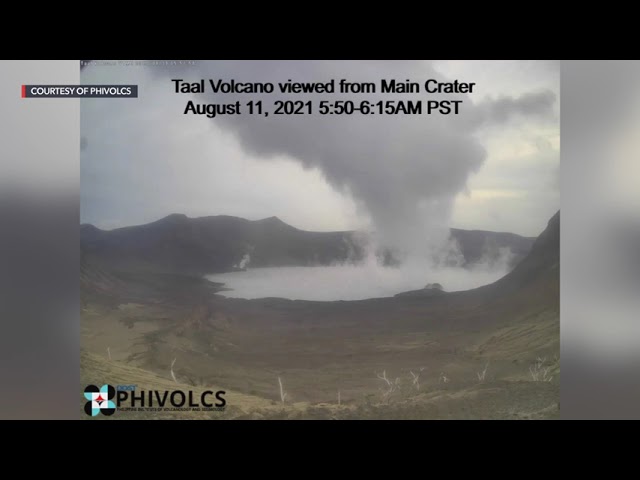 Sulfur dioxide (SO2) emission, meanwhile, averaged at 3,004 tons per day on Wednesday. This is much lower than the all-time high of 22,628 tons per day recorded on July 4, but it is also a notable level.

When SO2 is high, it means magma is relatively nearer the surface of a volcano.

Under Alert Level 2, Phivolcs reiterated on Thursday that the following can occur:

Phivolcs said entry into Taal Volcano Island, as well as occupancy and boating on Taal Lake, must remain strictly prohibited.

“Local government officials are advised to continuously assess and strengthen the preparedness of previously evacuated barangays around Taal Lake in case of renewed unrest,” added the agency. – Rappler.com