NO FORGETTING. Protesters hold a demonstration outside Quiapo Church in Manila on Wednesday, September 21, to commemorate the 50th anniversary of the declaration of Martial Law in the Philippines

MANILA, Philippines – Demonstrators trooped to the streets of Manila on Wednesday, September 21, to commemorate the 50th year since late dictator Ferdinand E. Marcos declared Martial Law, a monumental event in Philippine history that extended his grip on power.

One presentation also depicted the Marcos family as crocodiles, in reference to the massive corruption they enabled during the Martial Law era. 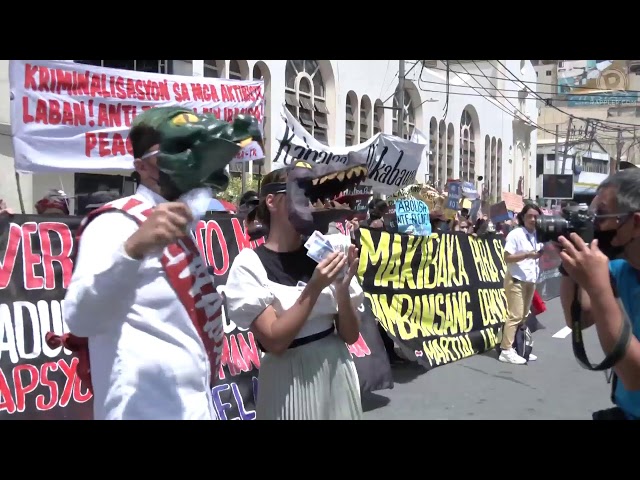 Another group of protesters also held their rally in the historic Mendiola thoroughfare.

Under Marcos’ martial rule, 70,000 people were detained, 34,000 were tortured, and 3,240 were killed, based on numbers from Amnesty International.

In 2022, Marcos’ son Ferdinand Jr. won by a landslide in the presidential elections, ending a decades-long project by the family to rehabilitate the Marcos’ brand of politics through what critics believe are networked propaganda, disinformation, and historical distortion. – with reports from Jairo Bolledo/Rappler.com