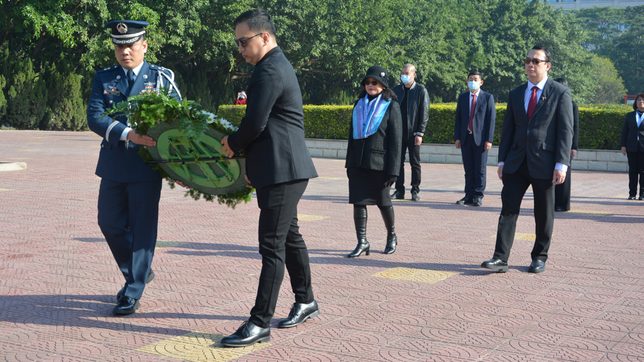 Photos courtesy of the Philippine Consulate General in Xiamen

MANILA, Philippines – Filipino diplomats paid tribute to national hero Dr. Jose Rizal in Fujian, China, home of the hero’s ancestors, as the Philippines marked the 125th anniversary of his martyrdom.

Consul General Maria Antonina Mendoza-Oblena and her spouse, Minister and Consul General Dinno Oblena, laid a wreath at the Rizal monument in the village of Shangguo in Jinjiang City on Wednesday, December 29. This was the eve of the anniversary of Rizal’s martyrdom on Thursday, December 30.

Jose Rizal Square in Jinjiang is the largest Rizal shrine outside the Philippines, according to Philippine Consulate General in Xiamen.

Chinese officials from the cities of Quanzhou and Jinjiang also attended the event at the Jose Rizal Square. The shrine, said the consulate, is “patterned after the Luneta Park” in Manila, and “serves as a lasting symbol of the friendship and deep historical and kinship ties between the Philippines and Fujian Province, China.”