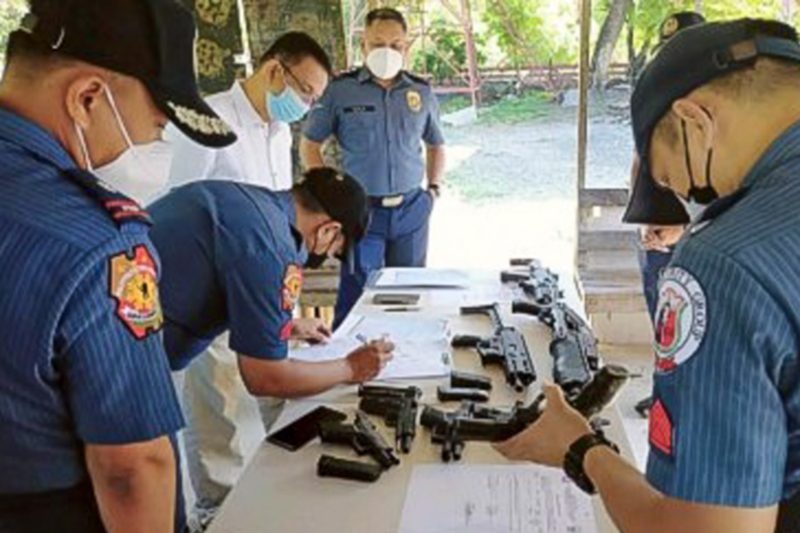 Eight of the weapons were registered in the mayor’s name, while one shotgun belonged to his sister.

On April 14, the siblings surrendered firearms to the police following an alleged shootout between cops and their personal security force on March 29.

The March incident forced the Someras into hiding as they faced trafficking complaints for the unauthorized employment of bodyguards, around a dozen of them former Army soldiers.

All their town council bets withdrew their certificates of candidacy during the election homestretch.

The reelectionist Someras, children of former town mayor and governor Rolando, lost in the May 2022 polls.

Maro got only 291 votes to mayor-elect Tyron Beroña’s 6,210 votes while Jaja secured only 708 votes, far from vice mayor-elect Samson Laguesta’s 5,573.

The case involving the outgoing officials is complicated.

The PNP replaced the town’s entire police force and Pilar was placed under the Commission on Elections’ (Comelec) control. Regional Mobile Police Force Battalion 15 (RMPFB 15) members replaced all 27 cops in the Pilar police office, including its chief.

In a PNp press conference at in Camp Crame on May 4, then-Comelec chairman Saidamen Pangarungan said he had also received confidential reports from the Comelec regional director, Ederlino Tabilas, and other sectors, “disclosing the apparent bias of the local police detachment in Pilar, Abra.”