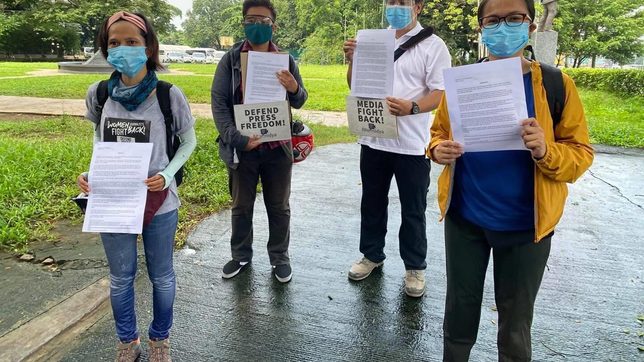 Progressive community magazine Pinoy Weekly on Thursday, July 30, filed a complaint before the Commission on Human Rights (CHR) over the recent confiscation of its printed copies in Bulacan.

“Bulacan PNP, with obvious knowledge from PNP national officers, has shown intolerance of our publication or any media product with what it deems ‘anti-government’ content. The police has, time and again, trampled on our constitutional-right to freedom of the press,” Pinoy Weekly editor-in-chief Kenneth Roland Guda said in his affidavit-complaint.

Guda filed the complaint 4 days after police seized thousands of copies of their publication at the local office of urban poor group Kadamay in Pandi, Bulacan. Pinoy Weekly described this as a “blatant act of repression” of the free press.

In September 2019, he said a group reportedly backed by the military and police barged into a Kadamay office in Pandi, and seized, among others, bundles of Pinoy Weekly magazines which they set on fire in the presence of cops.

In April, a group of relief workers with former Anakpawis congressman Ariel Casilao were stopped at a checkpoint in Norzagaray town in Bulacan as “the police took exception to the relief workers’ possession of Pinoy Weekly issue,” said Guda, quoting witnesses. The group were later ordered arrested and charged with inciting to sedition.

“We in Pinoy Weekly condemn these attacks on our press freedom, specifically the confiscation (and in one case, burning) of copies of our magazine on several occasions (September 19, 2019, April 19, 2020 and July 26, 2020) within the Bulacan province (Pandi and Norzagaray) which deprived our readers from marginalized communities of their right to access information, opinions, and analyses on national, local and sectoral issues,” Guda said.

“Furthermore, the red-baiting and even terrorist-baiting shown by NTF-ELCAC and PNP Region 3 endangers me, our staff, our readers, to possible physical attacks from the military and police in the name of its ‘whole-of-nation approach’ in counter-insurgency and counter-terrorism. This is especially true after President Duterte’s signing of the Anti-Terrorism Act of 2020,” he added.

Philippine National Police (PNP) chief General Archie Gamboa had earlier said that Bulacan police should not have labeled the magazines of Pinoy Weekly as “subversive documents” and that they could not use the Anti-Terror Law to prosecute its authors and publishers as there are no implementing rules and regulations for the law yet.

Gamboa had also urged Pinoy Weekly to file a complaint before the PNP Internal Affairs Service (IAS) regarding the raid.

The National Union of Journalists of the Philippines (NUJP), meanwhile, reiterated its support for alternative media, which has come under worse attack under the Duterte administration.

“For so long, the alternative media, whose roots date back to the courageous mosquito press that signalled the rebirth of the free press under the Marcos dictatorship, have…been rewarded with suspicion, threats, even attacks by the powers-that-be,” NUJP said.

The “State of Media Freedom in PH” report of the Freedom for Media, Freedom for All (FMFA) Network released in May 2020 outlined how press freedom in the Philippines further suffered a hit during the coronavirus pandemic.

Various government pages like that of the National Task Force to End Local Communist Armed Conflict (NTF-ELCAC) have also been used to routinely target and red-tag local media.

“It is for this shared history of struggling for press freedom and for the invaluable work they do that we are proud to have our colleagues from Altermidya alongside us in the continuing struggle to resist those who would seek to silence open discourse in our society,” NUJP said. — with reports from Niña Diño/Rappler.com