WASTED WATER. A major pipeline of the Cagayan de Oro Bulk Water Incorporated (COBI) spews thousands of cubic meters of treated water along a river in Taguanao, Indahag in Cagayan de Oro on Saturday, June 4. Despite repairs, many households and establishments either have no supply of tap water or are seeing the supply come in trickles.

Facebook Twitter Copy URL
Copied
A bulk water supplier of the Cagayan de Oro Water District loses an estimated 60 million liters of treated water in 24 hours due to a major pipe leak, worsening the water crisis in the city and some parts of Misamis Oriental

CAGAYAN DE ORO CITY, Philippines – Thousands of households and establishments in the city have lost their supply of tap water as the Cagayan de Oro Water District (COWD) and its supplier of treated water struggled to plug leaking lines.

The line is used to bring water from COBI’s water treatment plant in neighboring Baungon town in Bukidnon to COWD’s distribution system. 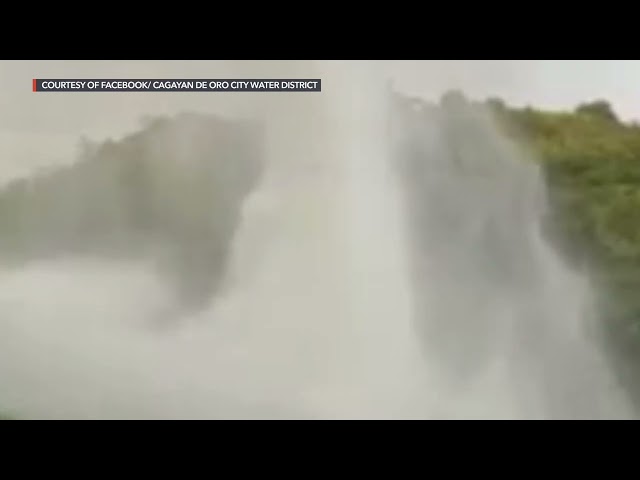 Now, many Kagay-anons, dependent on the COWD for their supply of tap water, are either using stored rainwater or scrambling to find other water sources for their basic needs.

The COWD has also found itself alternately delivering treated water in trucks from one community to another, but not all areas are being reached.

The supply of treated water to at least 14 barangays in Cagayan de Oro and a town in Misamis Oriental were adversely affected.

In a public notice, the COWD announced that COBI was done with the repairs on Sunday, June 5, and that the “normal flow of supply” had resumed at noon that day.

“Please allow time for pressure build-up before the water gets to your homes,” read part of the COWD announcement.

But three days later, the water supply still came in trickles and many faucets remained dry, especially in elevated areas.

The affected areas are:

The problem, however, is more than what meets the eye.

Even before the COBI pipeline spewed water on Saturday, June 4, never-ending repairs to plug the leaks in COWD’s pipelines have kept the utility firm from maximizing the distribution of treated water.

Since May 15 alone, the COWD released more than a dozen public notices about pipeline repairs, installations, interconnections, realignments, and maintenance flushing. Every time the COWD did any of these, the water supply in communities got disrupted.

Young said the COWD has been slowly putting in place a new network of pipes while repairing leaking lines in its present system.

“Many of these pipes are already very old – even older than the COWD. Replacing all of them would take time,” he said.

COWD, a government-owned and -controlled corporation, was created by the city government and took over from the now-defunct City Waterworks System in 1973 based on The Provincial Water Utilities Act of 1972.

The city’s water woes have worsened through the years that in May, Councilor Enrico Salcedo called for the resignation of members of COWD’s board of directors.

Its five directors, appointed by the mayor, have a fixed term of six years each.

Salcedo on Wednesday, June 8, blamed the COWD board again for the recurring and worsening water supply and distribution problems in Cagayan de Oro, accusing its officials of inaction.

He cited a P500-million fund that city hall offered to lend COWD without interest in 2020 so it could improve its services.

“The money is there. All that we asked for is a work program. But even that, they could not submit,” Salcedo told Rappler.

[OPINION] Crying out for water