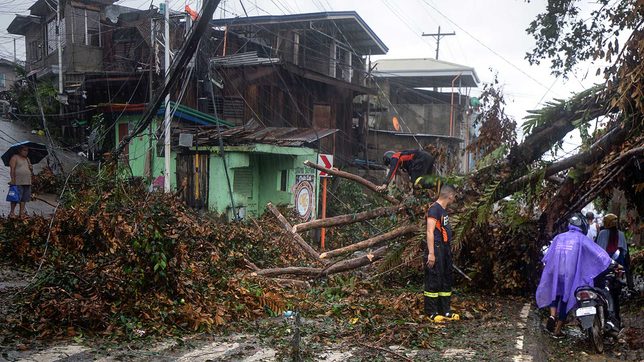 DEVASTATED. Residents of Barangay DAS, Toledo City, Cebu, cope with the damage brought about by the onslaught of Typhoon Odette on December 18, 2021.

MANILA, Philippines – Typhoon Odette, which devastated the Visayas and Mindanao, has left at 375 people dead, according to the tally of the Philippine National Police (PNP).

On Monday, December 20, PNP spokesperson Colonel Roderick Augustus Alba shared the consolidated data of the national police. Based on the tally, Central Visayas recorded the highest number of deaths with 170, as of 6 pm of December 20.

The region was followed by Caraga with 167 total deaths. Meanwhile, Western Visayas recorded 24, Northern Mindanao with seven, Eastern Visayas with six, and Zamboanga Peninsula with one death.

Meanwhile, the PNP recorded at least 56 missing and 500 injured. The breakdown of missing and injured are as follows:

Since the typhoon hit between December 14 to 17, the PNP has been monitoring Typhoon Odette through its regional and local police units. On December 18, the typhoon exited the Philippine Area of Responsibility. Typhoon Odette, the 15th tropical cyclone in the Philippines for 2021, made at least nine landfalls in the country. – Rappler.com