Five labor organizers were arrested in Cebu for allegedly violating quarantine rules on Monday, November 30, during a protest on the 157th birth anniversary of Filipino hero Andres Bonifacio.

Arrested labor activists Dennis Derige, Myra Opada, Joksan Branzuela, Jonel Labrador, and Cristito Pangan, members of Partido Manggagawa (PM), were among those who protested in front of the Mactan Economic Zone in Lapu-Lapu City to commemorate Bonifacio Day on Monday.

Sportswear manufacturer lays off 4,420 workers in Cebu due to pandemic 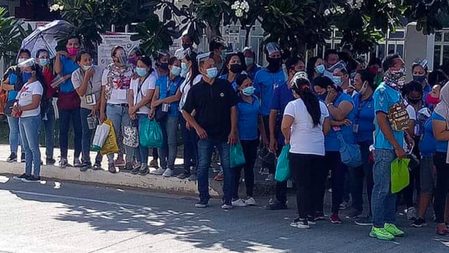 Police Captain Jay Samson of the Lapu-Lapu City Police Office Station 5 claimed that the 5 violated Lapu-Lapu City Ordinance No. 15-097-2020, which required residents to carry a quarantine pass when going out.

Rappler sought a copy of the said ordinance from Samson and the Lapu-Lapu City public information office, but has not received the document as of posting time.

“Actually when we arrived in the area, we advised them to just disperse. Because when we asked them if they had documents to conduct the said assembly, they cannot show anything to us. And when asked about the quarantine pass – we have an existing city ordinance in Lapu-Lapu, and they could not show us – they were arrested,” Samson said.

Samson said 3 of the protesters – Labrador, Branzuela, and Derige – will also be sued for disobeying a person in authority. He added that all 5 arrested protesters have met with their lawyer.

Partido Manggagawa Cebu spokesperson Rene Magtubo, in a phone interview with Rappler, stressed that protesters wore masks and observed physical distancing, among other things, during their Bonifacio Day protest.

When asked if the protesters indeed had quarantine passes during the protest, Magtubo did not answer directly.