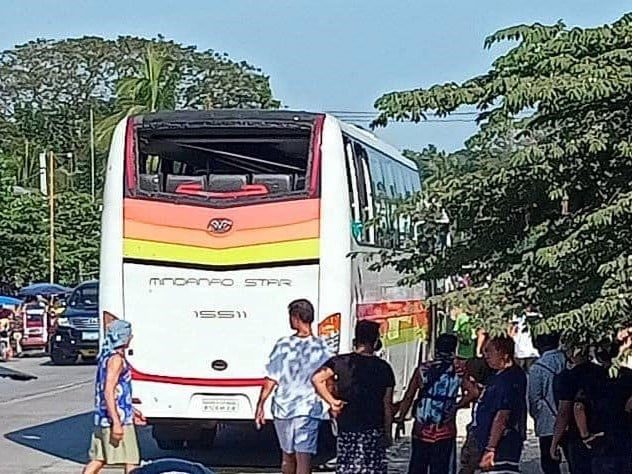 EXPLOSION. A blast shatters the rear window of a Mindanao Star bus with 20 passengers along the Davao-Cotabato highway past 8 am on January 11.

GENERAL SANTOS CITY, Philippines – Police tightened security measures in Cotabato due to a recent spate of violence in the province like the killing of a barangay official in Pikit town, a bombing of a bus in Aleosan town, and an explosion at a police-military outpost in Pikit.

Tighter security measures were imposed as the police linked a group of extortionists to the bombing of a Mindanao Star bus that was traveling from Davao City to Cotabato City on the morning of January 11. The explosion killed a five-year-old boy and injured six others.

“We are on double alert status,” Tayong said.

He dismissed speculations that the attacks were meant to avenge the killing of six people during a police operation to serve a warrant of arrest against a crime suspect in Barangay Gokotan, Pikit.

Tayong said the investigation pointed to the Al-Khobar extortion group as behind the bus bombing.

He said the evidence gathered bore the signature of the extortion group.

The Al-Khobar is known to target business firms in the province and nearby areas, and was blamed for several bus bombings in the region in the past.

Tayong, however, said they were not discounting the possibility that other groups such as the Bangsamoro Islamic Freedom Fighters (BIFF) were involved.

He said there was also no indication that the incidents were linked to the December 29, 2021 clash between the police and an armed group in Barangay Gokotan that resulted in the killing of six suspected members of a carnapping syndicate. Four cops were wounded in that encounter.

In that clash, authorities were serving an arrest warrant against the suspect, Joel Manampan, for a string of murder cases.

Authorities subsequently stumbled on a cache of high-powered firearms, including anti-tank rockets, and at least 442 motorcycles believed to have been stolen.

A day after the bombing of the Mindanao Star bus, Samsudin Masulot, a barangay official of Gokotan, was shot dead while he was riding his motorcycle.

Soccsksargen rpolice chief Brigadier General Alexander Tagum denied that the barangay official was killed because he helped authorities in their operation in Gokotan. –Rappler.com