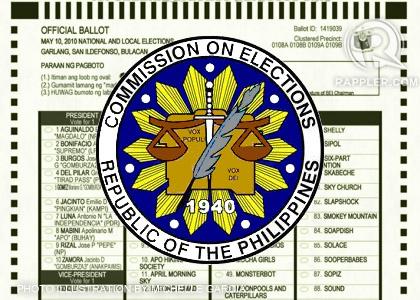 MANILA, Philippines - Former and present government officials and their immediate relatives have been nominated by partlylist groups as representatives for next year's elections.

Some of the nominees ran and lost in the 2010 elections -- a violation of Commission on Elections (Comelec) rules, a poll watchdog claims.

The following are included in the list of nominees of partylist groups and parties that expressed intent to join the 2013 mid-term polls:

Relatives of some former and incumbent officials are also nominees of some groups. They include:

A total of 289 groups submitted their manifestation of intent to join next year's elections. The deadline for filing was last April 30. Comelec resolution 9366 states that along with their manifestation, groups should submit to the poll body names of at least 5 of their nominees upon registration.

Among these 289 groups, 124 parties are still registered with the poll body. Only groups that obtained 2% of votes in two preceding elections are still accredited.

On the other hand, 165 of the groups are new groups whose registrations have yet to be approved. These include at least 14 groups that were previously delisted by Comelec.

Rappler notes that most of names in the lists of nominees submitted by the groups are related to each other by blood.

Comelec Resolution 9366, or the rules and regulations governing the 2013 partylist elections, does not specifically state that having 2 or more relatives as nominees of a single party is a violation.

"That will have to be ruled on by the en ban," Comelec spokesperson James Jimenez told Rappler on Sunday, August 12, when asked about the issue.

Election watchdog Kontra Daya claims that some groups violated the Comelec rules when they submitted names of "questionable" individuals as their nominees.

In a report, the group claims that some parties submitted names of individuals who lost in the 2010 elections. They said that it is a violation of Rule 4, Section 5 of the Comelec Resolution No 9366, which states that the list of nominees of a group "shall not include any candidate for any elective office or a person who has lost his bid for an elective office in the immediately preceding election."

Also, the group claims that most of the names submitted as nominees do not "represent the interest of the marginalized and underrepresented" due to their political and business backgrounds.

Below is the full report of Kontra Daya:

Jimenez told Rappler that they posted the list of nominees precisely to allow parties to come forward with what they know about the nominees.

"Interested groups like Kontra Daya should now seriously consider presenting their allegations and supporting evidence to Comelec so that all these issues can be sorted out before the Comelec finalizes everything for the ballot," he said.

Jimenez added that they're aiming to finish all hearings for partylist accreditation by end of September.

Kontra Daya has stated in news reports that they will be filing their opposition against various groups this week.

As for incumbent officials, Comelec has earlier announced that they will review their statements of assets, liabilities and net worth to determine whether they will be allowed to join the 2013 partylist elections. - Rappler.com