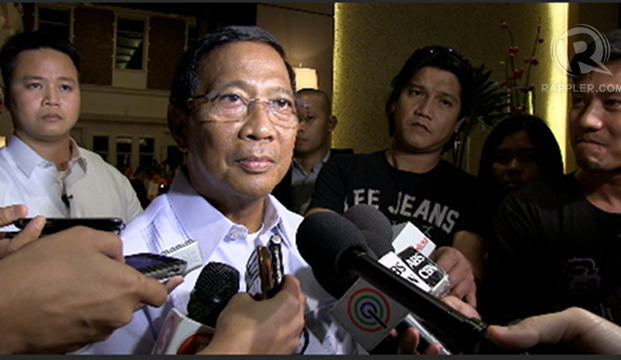 DESIRE ENDED. Vice President Jejomar Binay condemns the murder of a Makati City engineer who served during his term and who had wanted to run for mayor. Binay's camp believes the killing is politically motivated. File photo

MANILA, Philippines – The Office of Vice President Jejomar Binay believes the murder of his long-time city engineer in Makati is the first case of election-related violence for 2013.

Makati City Engineer Nelson Morales was gunned down by three armed men in Albay on Friday, September 7. He was 55 years old.

Morales was city engineer during Binay’s term as Makati mayor. He was also chairman for Albay of Binay’s coalition for the 2013 polls, the United Nationalist Alliance (UNA).

Binay’s spokesperson Joey Salgado told Rappler that the murder may have been politically motivated.

“The Makati City engineer who was shot in Albay was also a provincial chair of UNA. He will also be UNA’s bet for mayor of Malinao town [in Albay]. I think this is the first election-related killing in the run-up to 2013,” Salgado said in a text message.

Citing local media reports, Salgado said Morales was shot Friday morning as he was leaving a church where he stood as a wedding sponsor along with the vice mayor of Malinao.

Salgado said one of the gunmen shot Morales several times in the stomach and lungs while another fired to scare off the crowd. Morales was rushed to the hospital but died past 2 p.m.

In a separate statement, Binay revealed that Morales told him earlier this year that he planned to run for mayor of Malinao, Albay and sought his advice.

“I said I admired his dedication to public service and his desire to serve his hometown. He told me that for so many years, he has served the people and City of Makati. It’s about time that he serves his hometown and his kababayans.”

“His desire to serve, however, ended today in the hands of assassins,” said Binay.

Binay urged the Philippine National Police to go after the perpetrators of the killing. “The family of Nelson Morales deserves justice.”

Like Salgado, Tiangco hinted that the killing may have been related to politics.

“Engr. Morales is a trusted official of Vice President Jejomar Binay and Mayor Jun Binay, who are both affiliated with UNA. Morales served as city engineer since the term of VP Binay as mayor of Makati. Vice President Binay is a member of our executive committee while Mayor Jun intends to seek reelection in 2013 under the UNA banner,” said Tiangco.

Tiangco added, “We mourn the death of a good man and we reiterate the hope that the authorities will be able to arrest those behind this senseless killing.” – Rappler.com