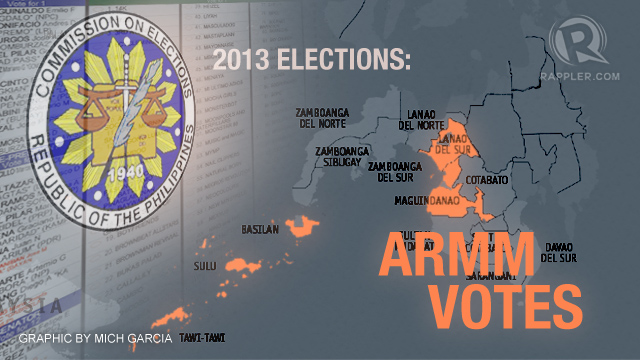 MANILA, Philippines - The Commission on Elections (Comelec) will reschedule for the second time the hearing of applications from the general voters registrations in the Autonomous Region in Muslim Mindanao (ARMM) last July.

The Commission has promulgated Resolution 9519, which moves the date of hearing for approving or disapproving applications from September 20 to 26 to November 26 to 30.

The general registration in ARMM, which ran from July 9 to 18, aims to clean up the region's list of voters and weed out problems such as multiple registrants and "flying" voters. The region has gained notoriety for election violence and massive cheating.

Comelec originally set the hearing on August 13 to 17. But since these dates fall within the month of Ramadan, they decided to reset it to September 20 to 26.

The poll body, however, admitted in its latest resolution that they have yet to finish screening and investigating all applications. As of September 11 only 662,524 applications have been processed.

"It is thus estimated that given the proximity of ERB hearing, while taking into consideration the period left for deletion, printing of classed list of applicants and forwarding, the said lists to the respective Offices of Election Officers, the AFIS cleansing process may not be completed as initially scheduled," said in the resolution.

A total of 1,566,795 applications were received during the 10-day registration, which yielded an average turnout of 88%. The total number of applications include those submitted by about 50,000 minors who were forced to join the registration.

Comelec adds that as of its latest screening, a total of 61,416 (9.27%) registration records in ARMM were found to be "true hits" and will be deleted from the database.

Due to the rescheduling of hearings, the poll body also extended until November 19 the deadline for filing of opposition to the voter applications. - Rappler.com