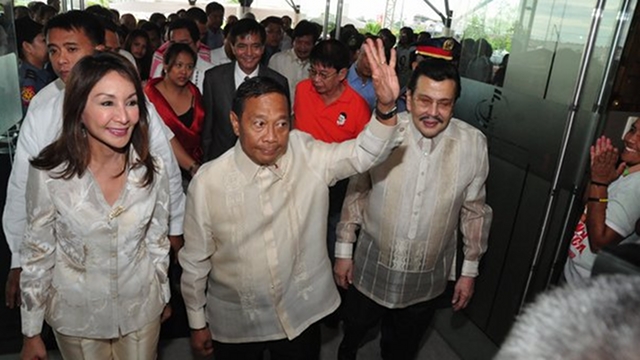 DROPPING SENATE. Cebu Governor Gwen Garcia is no longer running for senator under Binay and Estrada's UNA. She will instead run for Congress. File photo from Cebu website

Vice President Jejomar Binay confirmed that Cebu Governor Gwendolyn “Gwen” Garcia is dropping her senatorial bid and will run for Congress instead.

In an interview in Argao, Cebu, Binay said Garcia informed him in past days that she will no longer run for the Senate.

Binay stressed that the decision was made for Garcia to help her relatives campaign, and not because she is not faring well in surveys. In the September Pulse Asia survey, Garcia only ranked 24-29.

“She will not pursue her senatorial bid not because of the surveys but because her family needs to be together here in Cebu,” Binay said in Filipino.

Binay said UNA will have to discuss Garcia's replacement in the senatorial slate. The following are the remaining official UNA candidates:

UNA has said it may adopt Senator Francis Escudero and Movie and Television Review Classification Board Chairperson Grace Poe-Llamanzares as guest candidates.

Binay’s confirmation comes after weeks of reports that Garcia will drop her senatorial bid. As of last week, UNA Secretary-General Navotas Rep Tobias “Toby” Tiangco could not yet confirm the reports.

UNA announced Garcia’s senatorial candidacy in June but she has failed to climb up in surveys.

Garcia is on her last term as governor and can no longer seek reelection. Her brother, Cebu Rep Pablo John Garcia will be the gubernatorial candidate of their local party, One Cebu.

Garcia’s father, Cebu Rep Pablo Garcia has said that she should not disregard surveys because these help her determine the prospects of her candidacy.

The elder Garcia said there is a “clamor of mayor allies in Cebu for her to run for a congressional seat in Cebu instead of the Senate.”

UNA stood by Governor Garcia as she faces a graft case over an allegedly anomalous purchase of a P98.9 million land in Tiga-an, Naga, Cebu.