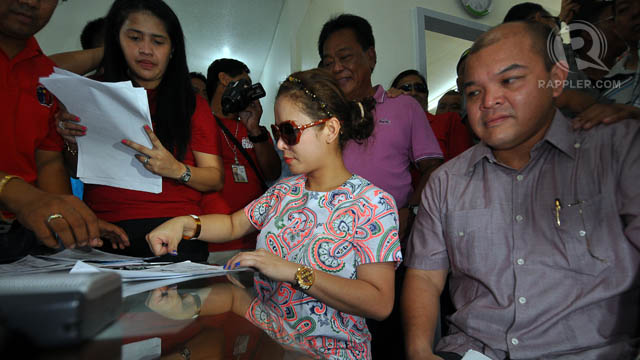 In a suprise move, Jinkee Pacquiao on Tuesday, October 2, joined her husband in filing certificates of candidacies with the local Commission on Elections office. Manny Pacquiao is seeking re-election as Sarangani representative, while his wife is running for vice governor.

Pacquiao's brother Rogelio will also run for a seat in the House of Representatives in nearby General Santos City, according to city councilor Runnel Rivera.

Jinkee will be the running mate of a Pacquiao ally, incumbent Vice Gov Steve Solon.

Solon and Pacquiao forged a political alliance after opposing each other in 2010.

In 2010, Pacquiao won over Solon’s uncle Roy Chiongbian for the lone congressional seat of Sarangani after the boxing congressman failed in his bid to get elected in nearby General Santos City in 2007

Various sectors had thought that incumbent Gov Miguel "Migs" Dominguez would be running for the post. But a source close to Dominguez told Rappler that "Migs had a hand in Jinkee's surprise candidacy."

In an interview, Domniguez explained that Jinkee Pacquiao's candidacy was meant to "break an impasse between warring politicians."

Malapatan mayor Alfonso Singcoy said the decision for Jinkee to run was made at 10am Tuesday -- just an hour before her husband’s schedule to file his own COC -- following consultations with Manny and Dominguez.

Singcoy said Dominguez called him and suggested that Jinkee instead should run after several mayors expressed their disagreement over an earlier decision to have Juan Domino as the running mate of Solon. 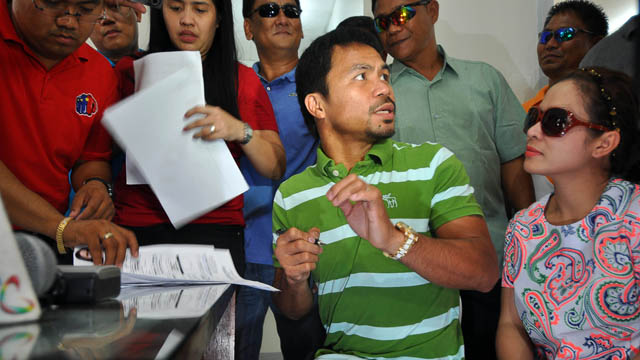 PACQUIAOS IN POLITICS. Jinkee Pacquiao follows her husbands's footsteps and joins politics in a surprise move. Photo by Cocoy Sexcion.

Domino was nowhere in the Comelec office at the provincial capitol compound in Sarangani when the Pacquiao couple arrived to file their COCs at around 1:20 p.m. He was seen by reporters emerging from a hurried meeting with Pacquiao in the latter’s residence, obviously disappointed.

Domino was the early choice for the post, easing out Provincial Board Member Eugene Alzate, another possible contender.

One incumbent mayor in Sarangani said Domino’s overbearing ways got the better of him.

“He played in the game of generals,” the mayor who requested anonymity was overheard saying.

Dominguez is serving out the last of his three 3-year consecutive terms and was prodded by Pacquiao to run for vice governor. He however declined the offer saying he is not cut for legislative work and would prefer an executive post. (A vice governor presides over the province's legislative body.)

Dominguez, who is on his last term as Sarangani governor, will be temporarily retiring from politics.

Pacquiao is believed to be just biding his time and will run for Senator in 2016 when he becomes eligible. The world champion boxer will turn 34 in December, but a candidate for senator must be 35 years on election day under Philippine election laws.

Jinkee, a former Jamora, hails from Kiamba town in Sarangani. She was a sales promoter of cosmetic products in a department store in General Santos City when she met the then struggling boxer. - Rappler.com, with reports from Edwin Espejo