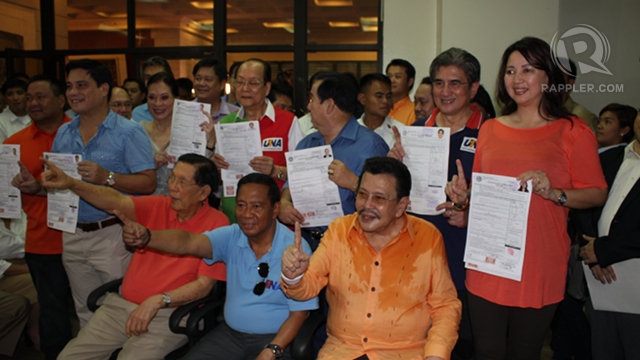 MANILA, Philippines – Where do senatorial aspirants stand on one of the most contentious laws in the country?

The law, which took effect on Wednesday, October 3, has drawn criticism from netizens, bloggers, journalists, human rights groups, academics, students and political parties. At least 10 petitions have been filed before the Supreme Court questioning the constitutionality of the law.

Critics said provisions like those criminalizing online libel and the so-called takedown clause violate freedom of expression, freedom of speech and give the government too much power over Internet users.

Here are the UNA candidates’ positions on the issue:

Honasan: Why heavier penalties for libel?

Photo from UNA's Facebook page Reelectionist Sen Gregorio Honasan II told Rappler that he supports moves to amend the law, particularly the provision imposing heavier penalties on online libel. The law imposes sanctions one degree higher than those provided for in the Revised Penal Code.

Honasan, one of the senators who voted to pass the law on 3rd reading, said he supported it to combat problems like the hacking of government websites.

Yet the senator pointed out that he is also the author of a bill decriminalizing libel, and the Freedom of Information Act or the People’s Ownership of Government Information (POGI) bill in the Senate.

“I support amendments to improve the [cybercrime law] but I subscribe to balancing rights with responsibility. We need to improve our capability to regulate cyberspace, which is unfamiliar terrain but we also need to study the enforceability of this law. Let’s tread carefully, legally into unchartered territory,” he said in a phone interview.

Honasan also said the outcry over the law must be tempered, and Internet users should first wait for the Supreme Court decision and the implementing rules and regulations. “Let’s not prematurely get angry.”

UNA candidates in the House of Representatives also want the law amended.

Photo from UNA's Facebook page Zambales Rep Milagros “Mitos” Magsaysay said that the current version of the law was not the one deliberated upon in the House of Representatives. She said she was not informed about the changes introduced in the bicameral conference committee.

“The penalties are too severe compared to the Revised Penal Code. When we tackled this in the lower house, the discussion was geared more to cybersex and pornography. Even the authors don’t recognize the law.”

Magsaysay said the law must go through the regular process including consultation with stakeholders.

“Congress should also review how we pass bills to avoid this in the future. Some changes were introduced in the Senate and we never discussed that in the House. The lower house should have been given a heads up,” Magsaysay said in a phone interview.

Photo from UNA's Facebook page Cagayan Rep Juan Ponce “Jack” Enrile Jr agreed, saying the law was rushed and “slipped through” lawmakers. He said that the penalties should not be heavier than those for crimes committed offline.

“The most alarming provision is the arbitrary takedown. It’s unclear what the basis of the takedowns are, who will do it, and the extent of monitoring,” Enrile told Rappler.

Photo from UNA's Facebook page San Juan Rep JV Ejercito also wants the law changed. “While I support the effort to put safety measures on violations in the cyberworld, we must also make sure that freedom of expression through the [Internet] should not be violated.”

“Normally, you need a warrant from the courts and not just the authority of the DOJ. The bill of rights ensures that government’s power is limited. The danger should be [grave] enough to suppress rights,” Gordon said in a phone interview.

Gordon, however, said it is premature to question the law before the Supreme Court prior to its implementation. “The onus should be on Congress to correct this because they are the representatives of the people.”

Photo from UNA's Facebook page In a column for the Philippine Star, former Senate President Ernesto Maceda said he supports moves to decriminalize libel. “The anti-cybercrime law goes in the opposite direction. It should be repealed.”

“The Congress and the President deserve criticism for passing the law."

"Sen. Ed Angara was the principal author of the law in the Senate,” wrote Maceda.

“But we should keep some sort of mechanism for checks and balances like leaving civil penalties and fines intact.”

Former Tarlac Governor Margarita "Tingting" Cojuangco is also in favor of removing criminal liability for libel and replacing it with civil damages.

In a text message, Cojuangco said, "The law is prejudicial to people's [right to a] free press and expression. I believe that libel in this cyber law gives a higher penalty of more than 6 years distinguishing cyber offense over libel offenses of 6 years and below in magazines, radio and print."

"My libel cases never came to a conclusion," she added.

Reelectionist senators Loren Legarda and Francis Escudero earlier said they are in favor of changing the law. The two were among the 13 senators who voted for the law. They are common candidates of UNA and the ruling Liberal Party.

Escudero has filed an amendatory bill repealing the provision on online libel. Like the other UNA candidates, he favors only civil liability for libel.

Legarda said on her Twitter account that she welcomes moves to revise the contentious parts “while we implement provisions to deter other alarming types of cybercrimes – child pornography, cybersex, and computer-related fraud.” – Rappler.com