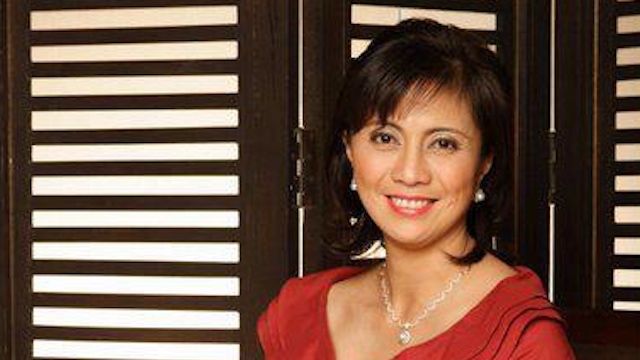 MANILA, Philippines (CORRECTED WITH UPDATES) - Maria Leonor "Leni" Robredo, the wife of the late Interior and Local Government Secretary Jesse Robredo, is being pressured to run for representative of the 3rd district of Camarines Sur.

We earlier reported initial information from our contributor in Naga City that she has made the decision.

But Naga City Vice Mayor Gabby Bordado stressed that they were still trying to convince her to run. Rappler apologizes for the error.

On her Twitter account, Robredo's daughter Aika said:"I think she is supposed to announce her decision this afternoon pa."

A lawyer, Mrs Robredo is being asked to run for the seat that will be vacated by Rep Luis Villafuerte Sr, who is on his last term. Villafuerte will run for governor of Camarines Sur against his grandson Miguel Villafuerte.

Bordado told Rappler that he is supposed to be the contender for the post. Another possible nominee of the Liberal Party is former Solicitor General Jose Anselmo Cadiz.

Both men submitted themselves to the local party process, according to Bordado. Three surveys were conducted by the Ateneo de Naga to determine who would have a better chance to win the seat against Nelly Villafuerte, wife of outgoing congressman Villafuerte.

Nelly Villafuerte led in the first two surveys. In the last survey, which was released only last Monday, October 1, Bordado already led by 13% while Cadiz landed at the bottom.

Bordado said that based on these results, the local party was set to declare him as the congressional bet of Camarines Sur.

But on Wednesday, October 3, Cadiz filed his certificate of candidacy, to the surprise of the other party members. "Cadiz did not comply with the terms of the [party] process," according to Bordado.

Concerns were raised that Cadiz's move would divide the local LP in the area.

Bordado said he met with Leni Robredo and her brother-in-law Butch Robredo. In that meeting, Butch Robredo suggested that Leni run for the post. "We need a unifying figure," Bordado told Rappler. "We wanted to protect the legacy of the late Secretary Jesse Robredo."

Leni Robredo left for Manila Wednesday night for a speaking engagement at the De La Salle University. She did not want to run. The 3 Robredo kids were against it, according to Bordado.

On Friday morning, the local party gathered at the Naga City Hall to announce its final lineup. At this point, Bordado announced that he's willing to give way to Leni Robredo and appealed publicly to her to accept the party's offer for her to run.

Supporters and local officials then proceeded to the Robredo residence in the city. Mrs Robredo said she has not made any decision yet since she wanted to talk to her children one last time. "She did not give a final commitment," Bordado said.

"So we are still praying and we will go to her house at 2 pm again," Bordado added.

Bordado himself has already filed his certificate of candidacy, not for Congressman but for Councilor, a status update posted on Team Naga, the official Facebook page of the city said.

The post said the following will comprise Team Naga:

A low-profile political wife, Robredo entered national consciousness following the death of her husband on August 18. President Benigno Aquino III praised the widow and her three daughters for the strength they showed throughout the ordeal.

There have been calls for Robredo to enter politics and even run in the 2013 senatorial race. But Budget Secretary Florencio "Butch" Abad, a close friend of the late Robredo, said that Mrs Robredo was not interested.

Only last September, the Judicial and Bar Council shortlisted her for 3 separate vacant positions for Regional Trial Court judge: Calabanga and Pili in Camarines Sur and Ligao City, Albay.

The JBC interviewed Robredo on February 22. Robredo is connected with the Naga chapter of Saligan, a national alternative lawyers’ group helping farmers.

The well-loved Jesse Robredo died on August 18 in a plane crash off Masbate.

The deadline for filing of candidacy is at 5pm today, October 5. - Rappler.com