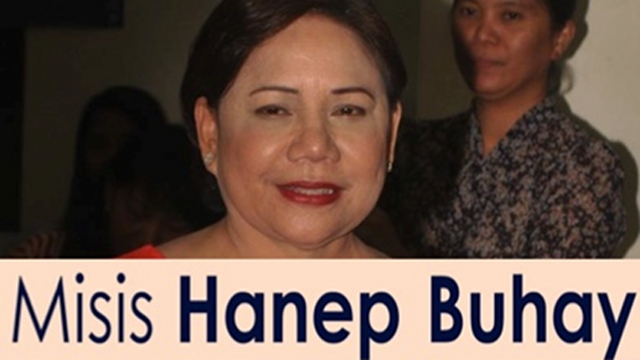 MANILA, Philippines – What’s the use of political ads and social media accounts promoting her as “Cynthia Misishanepbuhay” if voters won’t be reminded of that nickname when they scan the ballots on Election Day?

Quite basic, but this is a strategy that the camp of Nacionalista Party senatorial bet Cynthia Villar didn’t overlook: the moniker you use in the campaign should be indicated in your certificate of candidacy (COC) and should also appear as part of your official name that would appear on the ballot. You sustain the name recall; you don’t confuse the voters.

In filing her COC last Tuesday, October 2, Villar, a former Las Piñas congresswoman, wrote “Cynthia Misishanepbuhay” as her nickname. Just below that, in the portion where a candidate is asked what name he or she wants to appear on the ballot, she wrote: “Villar Cynthia,” followed by “Misishanepbuhay” and her party “NP.”

The nickname also rides on the branding of her husband—she is the “misis” of Manuel Villar Jr, former House Speaker, Senate President, and 2010 presidential aspirant bet who made it in life from being an entrepreneur to a housing magnate.

Other senatorial aspirants don’t have the standout nickname that Mrs Villar has, but apparently learned the strategy of enhancing name recall from past electoral exercises. They used their last names in their nicknames to make sure voters don’t miss them. These candidates then have nicknames like “Loren Legarda,” “Jamby Madrigal,” and “Risa Hontiveros.”

As opposed to just using nicknames like “Migz,” “Koko,” and “Sonny,” Legarda, Madrigal and Hontiveros included their family names in the nicknames to be clearly identified.

Now, candidates’ names are printed on the ballot and the voter only need to shade the corresponding ovals, thus the need for those names to bear the nicknames that the aspirants are known for.

Another aspirant, San Juan Rep Joseph Victor “JV” Ejercito of the Pwersa ng Masang Pilipino, is relying on family branding. In his COC, he wrote “Estrada JV” as nickname and Joseph Victor Ejercito as his name on the ballot.

“My father has been insisting that I use Estrada because he feels that in the rural areas, especially in the mountainous areas in the countryside, they do not know Ejercito,” he told Rappler. 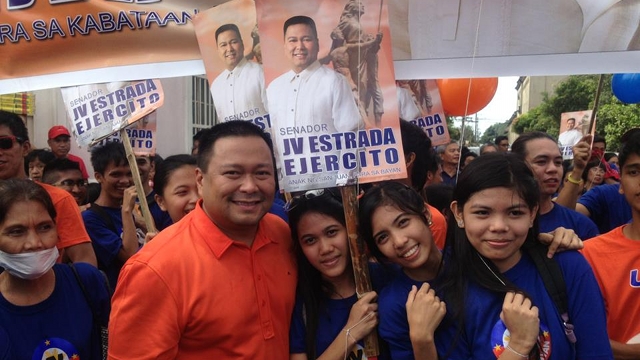 ESTRADA FACTOR. Rep JV Ejercito is using the Estrada name in his campaign. He says his father told him it is known more in far-flung areas. Photo from Rep Ejercito's Facebook page

Ejercito began using the nickname in the September Pulse Asia survey. From 6-9 in May, his ranking rose to 3-5 with the Estrada name.

“I hope the Comelec will allow me to use Ejercito Estrada. It’s not just an alias. Everybody knows my father is President Estrada, but I’m known as JV. Nobody can dispute that.”

Others are also relying on family association. The President’s cousin, Bam Aquino, chose the nickname “Benigno Bam” to go with his official ballot name of Paolo Benigno Aquino IV. The name Benigno Aquino has been used by generations of Aquino politicians, owing to the popularity of the late Sen Benigno “Ninoy” Aquino Jr (Bam’s uncle) and his son, now President Benigno “Noynoy” Aquino III.

The same goes for another presidential relative. Returning Sen Ramon Magsaysay Jr included his last name in his nickname, “Jun Magsaysay.” He is the son of the late popular President Ramon Magsaysay. 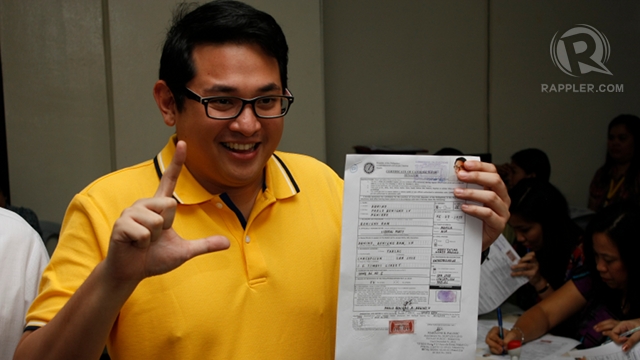 'BENIGNO BAM.' LP senatorial candidate sticks with the "Benigno" brand, choosing to include the name in his ballot nickname. Photo by Don Regachuelo

Pollsters have admitted that some politicians’ nicknames tended to confuse voters. Pulse Asia president Ronald Holmes cited as example Cagayan Rep Juan Ponce Enrile Jr of the Nationalist People’s Coalition. He had the nickname “Enrile” in the September Pulse Asia survey. He is the son of Senate President Juan Ponce Enrile.

“People might think that Jack Enrile is the Senate President. The confusion might still be there,” Holmes told the ABS-CBN News Channel.

Yet in his COC, the younger Enrile dropped that very element that boosted his name recall; he opted to use his real nickname, “Jack.” The name he indicated on his COC is Juan Ponce Enrile Jr.

Movie and Television Review and Classification Board Chairperson Grace Poe-Llamanzares, an Independent, is another case of an aspirant foregoing the built-in advantage of family branding. The daughter of the late action star and presidential candidate Fernando Poe Jr used the nickname “Grace.” This was even after the Pulse Asia surveys listed her nickname as “FPJ,” the initials by which her very popular father was called. 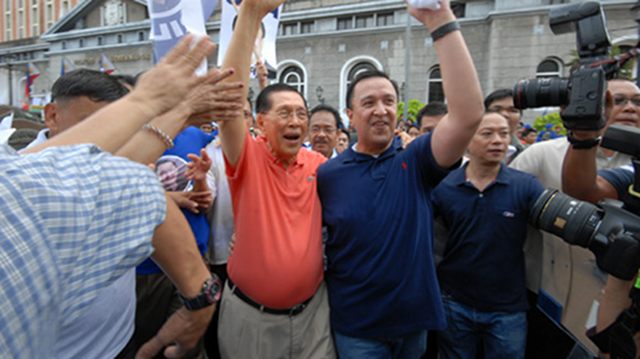 Names and nicknames have caused controversies in past elections.

This was in reference to candidates Francis “Kiko” Pangilinan and Ralph Recto who are married to popular actresses Sharon Cuneta and Vilma Santos, respectively.

The senator told Rappler: “There was no ‘Peter’ in the name of Joselito Cayetano, but he put that because many know me as either Peter Alan, Alan Peter, or Peter. I’m really more known either for my last name or first name except the First Couple really targeted me in 2007.” He was referring to then President Gloria Macapagal-Arroyo and First Gentleman Jose Miguel Arroyo, who he had been criticizing for various controversies.

Cayateno then had to come up with advertisements asking people to write his full name on the ballot, to make sure the votes would be credited to him.

As in 2007, Cayetano is using “Compañero” as his nickname for his re-election campaign this time. He inherited it from his father, the late senator Renato Cayetano, who became known for his public affairs program, “Compañero Y Compañera.”

Cayetano said that with automation, he expects that he will no longer encounter the problems he and other candidates did in the manual polls.

“I’m hoping with the automation, this problem will be solved. Even if 5 Cayetanos run, if they don’t have exactly the same names, there will be no problem.” – Rappler.com