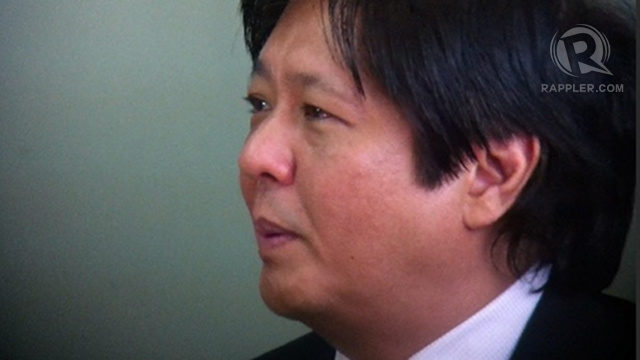 'LET'S SEE.' Sen Bongbong Marcos says he is not saying no to a possible presidential run but it is not his priority for now. File photo

MANILA, Philippines – Reports of his possible return to Malacañang have long been circulating. Has Sen Ferdinand “Bongbong” Jr finally decided to gun for the presidency?

“There’s a saying, ‘Never say never,’ so maybe,” Marcos responded in an interview on radio dzBB on Sunday, November 25.

Asked about a possible presidential bid in 2016, Marcos said he is not closing his doors.

The senator said he will have to see if the political alliances and partnerships in 2013 will go beyond the polls.

“Whoever are partners now, they are not going to be the allies come 2016 but that will be clearer after the elections.”

Marcos is a member of the Nacionalista Party (NP), which entered into a partnership with the ruling Liberal Party (LP) and the Nationalist People’s Coalition to form the administration’s 2013 senatorial ticket. The senator is not a reelectionist.

He said he thanks those urging him to run but 2016 is still far from his mind.

He added, “’That cannot be decided based on mere whispers and it’s a good thing I have some experience about how difficult it is to be president and how hard the job of a president is.”

If he decides to run, Marcos will be up against Vice President Jejomar Binay, the only politician who has so far declared presidential ambitions for 2016.

Marcos spent about 20 years in Malacañang during the presidency of his father, the late dictator Ferdinand Marcos. He has been criticized for failing to acknowledge the abuses during Martial Law, calling the period “neither a bed of roses nor a bed of nails.”

In past interviews, he has expressed openness to a possible presidential run.

In September, he said, “You, you work for it. Let’s see how it will turn out. Who knows?”

The senator said he is “excited” about the NP’s partnership with the LP, headed by President Benigno Aquino III whose family fought his during Martial Law.

“Finally, I’m not in the opposition after what, 15 years. It's a new experience for me,” he said, referring to his stand against the Arroyo administration. – Rappler.com