Abad: LP should hear out Toto on endorsed Ampatuans 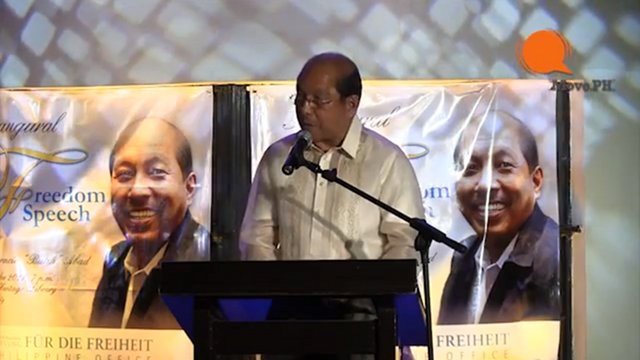 MANILA, Philippines – If Maguindanao Governor Esmael Mangudadatu has no problems endorsing an Ampatuan for the 2013 elections, why should the Liberal Party?

This was how LP stalwart and Budget Secretary Florencio Abad explained on Monday, November 26, the need for the party to afford Mangudadatu the "benefit of due process" for giving the party nomination to some members of the Ampatuan clan.

The patriarch and major members of the Ampatuan clan are among those tagged as responsible for the 2009 massacre of 58 persons, including Mangudadatu’s relatives, political supporters, and media workers in the province of Maguindanao.

The victims were on a convoy to accompany then Buluan Vice Mayor Mangudadatu in filing his certificate of candidacy for governor, challenging Andal Ampatuan Jr, the son of the governor then.

Since the massacre, there are more Ampatuans running for various local posts—from 68 in 2010 to 74 next year. At least 10 of them have indicated in their certificates of candidacy that they are running under President Aquino’s LP, whose provincial chair is Mangudadatu.

"Considering that he is one of the principal victims—his wife and relatives were murdered in this massacre, I’m sure we all know that he would be the most insulted and aggrieved if it were the same people who perpetrated this massacre onto his family. So, you know, we should give, as I said, benefit of due process to Governor Mangudadatu," Abad said.

Abad’s position contradicted another party official’s. Sen Franklin Drilon earlier said the LP should cancel the Certificates of Nomination and Acceptance (CONA) that were issued to these Ampatuans. The CONA is necessary for a non-independent candidate to be file his or her certificate of candidacy.

"We should revoke whatever certificates of nomination and acceptance that may have been issued to them. I am not in favor," Drilon said.

But Abad explained that Mangudadatu could have approved the membership of some members of the Ampatuan clan in LP "with due consideration of the memory of his wife and his loved ones."

The party assigns to local leaders, like the governor, the signing of the CONA.

"When we queried from him how come that there are those candidates with the said family names and his answer is: Well, not all Ampatuans are like the Ampatuans who are being tried now for what happened with the massacre of journalists and those other people of Maguindanao and Sultan Kudarat," Abad said.

Presidential Spokesman Edwin Lacierda earlier said that it's within the right of the party to review the certificate of nomination and acceptance (CONA) of these Ampatuans if Drilon feels the need for one.

President Benigno Aquino III himself has already tasked Abad and Secretaries Joseph Abaya and Manuel Roxas "to look into this situation and see whether, in fact, those designations should be upheld."

Abad explained that they are tasked to determine whether Mangudadatu's decision to accept the Ampatuans is consistent with the party's principles, and to make a recommendation to the President regarding the issue.

"[The recommendation] has to be soon because, you know, there is December 21 that’s lurking there, which is the deadline, if at all necessary, to file substitutes," he said. – Rappler.com