Jinggoy on VP bid: It's up to you 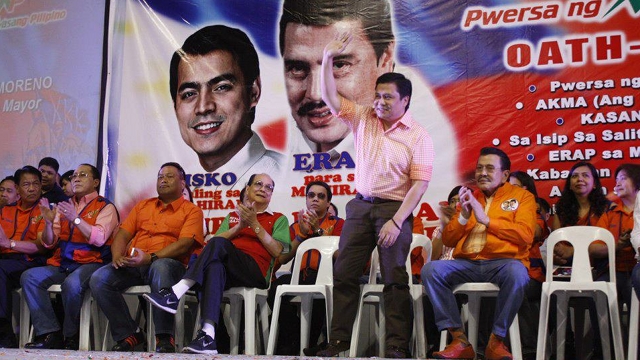 MANILA, Philippines – Will you support a Jinggoy Estrada candidacy for vice president?

The Senate President Pro-Tempore joked that he will leave it up to his partymates and supporters to help him become vice president someday.

Long rumored to run for vice president in 2016, it was the first time Estrada hinted that he is interested in the post.

Estrada cracked the joke at the oath-taking of members of the Pwersa ng Masang Pilipino (PMP) in Manila on Friday, November 30. The senator is the president of the party founded by his father, former President Joseph Estrada.

In his speech at the event, Estrada said his life and political career always followed that of his father – from becoming mayor of San Juan and senator, to receiving acting awards, and even until detention.

While mentioning that his father became vice president, Estrada quipped, “Kayo na lang bahala kung anong susunod doon.” (It’s up to you what comes after that.)

“Pero ang ‘di niya magagaya sa akin, mas pogi ako sa kanya,” Estrada joked. (But what he can’t copy from me is I am more handsome than he is.)

Father and son Estrada were both jailed for plunder but the actor-turned-politicians remain popular. Their performance in recent polls has been seen as a comeback of the PMP, whose membership dwindled following the elder Estrada’s ouster in 2001.

The former President almost became president again in 2010, finishing second to Benigno Aquino III. The elder Estrada is running for Manila mayor in 2013.

Senator Estrada also ranked second in the 2010 senatorial race, next to Sen Bong Revilla. In the Senate, the senator is also the right-hand of Senate President Juan Ponce Enrile, another PMP stalwart.

Another Estrada son, San Juan Rep JV Ejercito, may join his brother in the Senate if he wins in the 2013 senatorial race. The brothers recently had a public spat over a sibling rivalry. 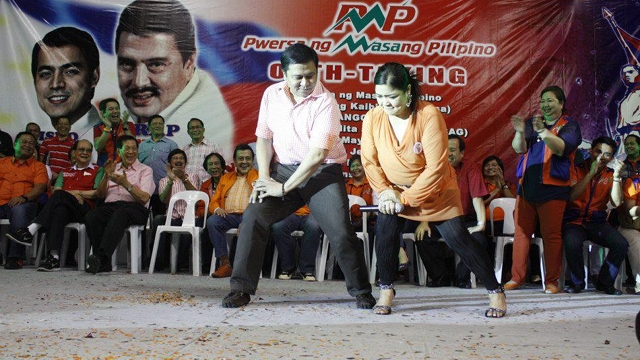 The younger Estrada has been reported to be a possible running mate of Vice President Jejomar Binay, a close friend and 2010 running mate of his father. Binay and Estrada joined forces to form the United Nationalist Alliance (UNA) for the 2013 and 2016 elections.

Also rumored to be a possible Binay running mate is another ally of the vice president, Sen Francis Escudero.

The Vice President said though that he has not yet chosen a partner.

“Iyang bagay na iyan, halimbawa tayong apat, kapag sinabi kong ikaw ang kandidato kong vice president eh ‘di ngayon pa lang 2012, kaaway ko na itong tatlong ito,” Binay said in July. (If there are 4 of us and I say you are my candidate for vice president, as early as 2012, the 3 others will be my rivals.)

Navotas Rep Tobias “Toby” Tiangco, PMP vice President for Metro Manila, said Sen Estrada’s joke should not be taken to mean the party is already fielding him in 2016.

“Wala naman inannounce si Sen Jinggoy, pahaging lang.” Tiangco said in a text message. (Sen Jinggoy did not announce anything. It was just a hint.) – Rappler.com