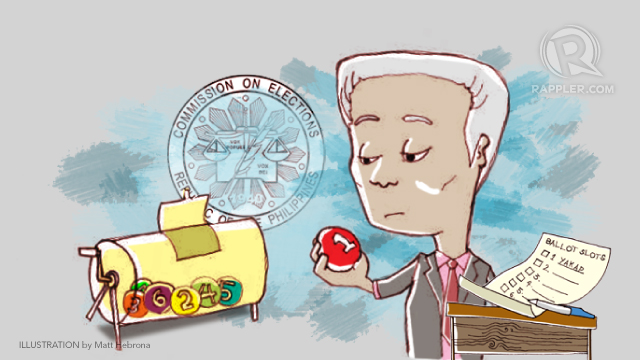 MANILA, Philippines - Groups that have been accredited for the party list next year will know what slots they will occupy on the ballot by December 17, Monday.

The Commission on Elections (Comelec) has reset from December 14 the scheduled raffle to determine the order by which the organizations will be listed on the official ballots for the May 13 polls.

This is the first time that the poll body will be deciding the party-list slots at random. It was only in 2010, the first time the elections were automated, that all the participating groups had to be listed down on the ballot. Voters had to shade the oval corresponding to their chosen group.

At the time, the groups were listed in alphabetical order, thus encouraging subsequent applicants to register names that started with "1" or "A" to make sure they appeared on top of the list.

Before this--since 1998, when the first party-list election was conducted--there was only a blank on the ballot, and the voter had to write down the name of the organization he was voting for. At the poll precincts, the names of accredited groups were also alphabetically listed as reference for voters.

In Resolution 9572, promulgated on Thursday, December 6, the Comelec didn't give any reason for moving the date. It stated, however, that they have created a committee which will conduct the raffle. The committee will be headed by Commissioner Rene Sarmiento.

Other details of the raffle remain the same. It will be conducted at 1:30 pm at the Comelec main office in Intramuros, Manila.

The leader of each party-list group and representatives from media will be involved in the raffle.

Comelec spokesperson James Jimenez earlier said the raffle is meant to avoid party-list groups jockeying for the first letters of the alphabet or number 1.