KBP on more airtime: Not all about money 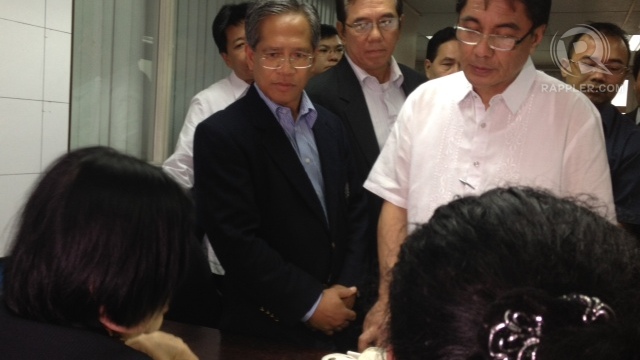 MANILA, Philippines – Traditionally among the biggest gainers in campaigns, broadcasters trooped to the Commission on Elections (Comelec) on Thursday, January 24, to protest the new airtime limits for candidates.

In an 18-page motion for reconsideration, the KBP said the new resolution will hit broadcasters like them. They said the new rules will prevent bets from reaching a wider audience, and deprive the public of their right to know their candidates.

“It's not all about money. As I said a while ago, out of concern also for the public, and for the right of other sectors, like the candidates, who may lose the chance to reach the public. In the same manner that the public will be deprived, as I said, of their right to know whatever they want about their candidates,” Basbaño said in a mix of English and Filipino. (Watch more in the video below)

Heeding the plea of election watchdogs, the Comelec implemented its new campaign rules to level the playing field for candidates, especially those with a limited budget.

Problem: How to check

In KBP's motion, a major issue raised is the process of checking if a candidate has breached his airtime limits.

Comelec Resolution No. 9615 prohibits national candidates from exceeding 120 minutes of ads on TV and 180 on radio, across all stations.

In past elections, the Comelec limited advertisements on a per-station basis.

Under the new set-up, the KBP asks: How can they ensure that by airing a candidate's political ads, broadcasters do not aid in breaching the ad limit? What if a candidate has aired over 120 minutes of ads in other stations, and a broadcaster doesn't know this and thus airs another set of ads?

“The airing of every election propaganda material therefore subjects the station to potential liability even for acts of third parties,” the KBP explained.

It added: “This situation is, in fact, one of the rationales for the limits being imposed on a per-station basis. In this case, the station would definitely know whether it is airing campaign propaganda in excess of the allowable limits.”

The KBP also said the airtime limits will deprive candidates “of their right to access a broad mass of voters.” The group said the new rule will force candidates to prefer national over local stations for advertising.

“The result of aggregating the airtime for political propaganda... has also the effect of limiting the ability of a candidate to effectively make placements in areas (that) he considers should matter... This situation also results in depriving voters in the provinces of their right to information,” the KBP said.

Broadcast giant GMA Network Inc, which is not a KBP member, filed a similar plea on Wednesday, January 23.

It added the verification process is “tedious” and will entail huge expenses.

“Hindi ko maintindihan bakit KBP ang lumalaban sa airtime eh. I think it should be the candidates who should question it,” Brillantes said in an interview with reporters. (I can't understand why it's KBP that's protesting the airtime limits.)

Sen Alan Peter Cayetano, for his part, said the airtime limit is a disadvantage for candidates who want to “target” their audience. A national candidate may, for example, want to push for agricultural issues in agricultural areas – something fit for local and not national stations.

Cayetano said it will be difficult to do this under the new rules.

He said the Comelec is right in limiting campaign expenses, but the more crucial move is to monitor those who bankroll a candidate's campaign. Other watchdogs earlier urged the Comelec to monitor campaign funders, too.

Sen Chiz Escudero, on the other hand, welcomed the airtime limits.

“Those who have deep resources will no longer lord over the airwaves and leave those who have meager resources way, way behind... At least no single candidate can put one over the other in terms of airtime. It's a fair game for everyone,” Escudero said.

Escudero, however, said the Comelec is vague in its rules on online campaigns. Brillantes himself acknowledged this, but said the new resolution “is very clear” in other aspects. – Rappler.com