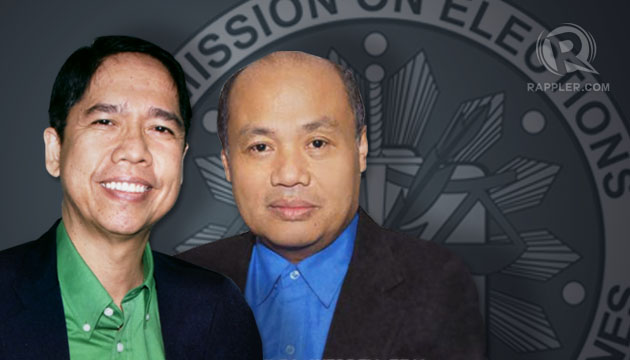 MANILA, Philippines – Separately, they joined the Commission on Elections (Comelec) at its most trying moments. One was appointed when the reputation of the poll body was at its lowest; the other, when the poll body was trying to recover from a bribery scandal involving its former chairman.

On Saturday, February 2, they will retire as the Comelec prepares for the country's second automated polls in May. (The retirement ceremonies will happen today, Friday, February 1.) President Benigno Aquino III has yet to appoint their replacement.

Commissioners Rene Sarmiento and Armando Velasco hang their robes, proud that they never got embroiled in controversies such as the ones that marked the terms of their former colleagues.

Higher-ups getting involved in scandals have become staple for Comelec.

In 2005, the Senate Blue Ribbon sought the prosecution 5 incumbent polls officials led by chairman Benjamin Abalos and two retired commissioners. They were being held liable for the anomalous P1.3-billion poll automation deal with the Korean-led consortium Megapacific.

Megapacific was supposed to steer the country’s first automated polls in 2004, a presidential election where the sitting president, Gloria Macapagal-Arroyo, was running. But the Supreme Court nullified the contract.

The committee found that the involved poll officials engaged in “manipulated bidding done in flagrant violation of the law and with utter disregard to public interest.”

The Megapacific machines are rotting in a rented warehouse.

Then in 2006, the wiretapped conversations between President Arroyo and Comelec Commissioner Virgilio Garcillano became public and almost led to the collapse of her government.

In the phone call, made during the canvassing of votes in Mindanao, the President was heard checking with Garcillano if she would still lead by one million over her closest rival. Garcillano told her it would be ensured.

Garcillano became a most-wanted man, dragging with him in the mess a number of Comelec rank-and-file officials now collectively known as the “Garci Boys.” These were the group of election operators within the Comelec who manipulated the manual system of elections and whom Garcillano cultivated as he rose through the ranks of the poll body.

The Commission’s image hit the gutter in 2007 when Abalos resigned as poll chief after he was dragged into a bribery scandal over a government contract that did not even involve elections.

Abalos was pushing for the China firm ZTE to bag the government’s $329-million broadband project. So he tried to bribe with $10 million the company of Jose de Venecia III, son of former House Speaker Jose de Venecia Jr, to withdraw its bid.

“I did this to spare the Comelec from the malicious attacks against my person,” Abalos said.

After a brief respite from controversies in 2010, when it administered the first nationwide automated elections, the Comelec got its reputation sullied again. In 2011, one of Garcillano’s men, former Maguindanao poll supervisor Lintang Bedol, finally surfaced and admitted to orchestrating the election fraud in the province to favor the administration candidates in the senatorial race in 2007.

Bedol’s confession led to the filing of an electoral sabotage case against President Arroyo, Abalos, and himself. It also led senator Juan Miguel Zubiri, who was accused of benefitting from the cheating, to resign.

Only Sarmiento and Velasco were unscathed in the successive scandals.

In April 2006, Sarmiento was appointed to Comelec by President Arroyo upon the recommendation of former Chief Justice Hilario Davide Jr, who was then the presidential adviser on electoral reform. He would finish a full term of 7 years under 3 Comelec chiefs: Abalos, Jose Melo, and incumbent Sixto Brillantes Jr.

But Sarmiento was initially reluctant. His wife vehemently objected to the possible appointment. “She was afraid I would get sucked by the system,” he said, referring to the bad reputation of poll body at the time.

He was, at the time, vice chair of the peace panel negotiating with the Communist Party of the Philippines-National Democratic Front. Executive Secretary Eduardo Ermita talked to him several times to accept the Comelec post.

He consulted the clergy, non-government organizations, and poll watchdogs, which had given up hope on Comelec following the “Hello, Garci” wiretap scandal the year before.

They prevailed over his wife’s objection. Sarmiento was aware of the Comelec’s eroded credibility, but the challenge of making a “ripple of difference” appealed to him.

He would soon find out how the country’s political system corrupts a constitutional office like the Comelec.

In two instances, Sarmiento was offered an envelope filled with cash by politicians he refuses to name. He did not accept the generous gift—bribe, actually—and the givers never bothered him again. (Watch more in the video below.)

In the en banc chaired by Abalos, Sarmiento found himself the lone dissenting voice in election issues and cases that were being decided in favor of the Arroyo administration and its officials. For instance, he pushed for the prosecution of the election officials named in the “Hello, Garci” wiretapping scandal, but he did not get the support of other commissioners.

He might have been an Arroyo appointee, but Sarmiento said he “cut the umbilical cord” from the appointing power when he assumed his Comelec post. He wanted to maintain his independence.

Assessing his 7-year stint, Sarmiento says he is proud of being able to keep his record clean and being able to push for reforms in Comelec.

When Chairman Melo was having doubts on the prospects of automating elections nationwide, Sarmiento was an encourager. “I told the chairman: Either we sink or swim here. Let’s proceed with the automation. We have an obligation to the people.”

Sarmiento also championed the rights of the disabled and detainees whose cases had yet to be decided with finality. About 47,800 detainees can now enjoy their right of suffrage.

Joining in the crackdown on groups that have been making a mockery of the party-list system is another highlight of his stint. For instance, he authored the resolution disqualifying Ang Galing Pinoy. The group of security guards, farmers, and tricycle drivers is represented in Congress by Juan Miguel “Mikey” Arroyo, son of the former and one of the richest lawmakers. The Supreme Court however stopped the Comelec from enforcing its decision pending a final verdict on the matter.

Like Sarmiento, Velasco had the backing of the Catholic clergy for his appointment.

Velasco was unknown outside of the Comelec, and thus was not on the radar of those who were looking for the replacement of Commissioner Moslemen Macarambon, who had been bypassed by the Commission on Appointments.

But Comelec personnel welcomed Velasco’s possible appointment. He was an insider, a member of the rank and file who started as city election officer in Baguio City. Before him, only two homegrown officers were appointed commissioners: Resurreccion Borra and Garcillano.

What he lacked in endorsement from the political circles was offset by the support of the clergy. In an interview, he admitted his nomination got the backing of an influential Catholic bishop from Luzon as well as the clergy. He refused to identify the bishop.

Velasco was appointed in November 2008 for only 5 years, just to finish the term of Macarambon. But his knowledge of the internal problems of the poll body enabled him to immediately introduce reforms, particularly the decentralization of decision-making.

Velaco also said he pushed for the removal of the requirement in the overseas absentee voting law that mandates immigrants who want to avail of the initiative to issue an affidavit of intent to return to the Philippines after 3 years. The proposed amendment is pending on 3rd reading in Congress.

But nothing beats the fact that he was part of a historic electoral exercise—the 2010 automated polls—which somehow restored public confidence in Comelec. The preparation and conduct of the polls “may not have been perfect,” but it was peaceful and generally clean and honest, he says. (Watch more in the video below.)

But not everyone is ready to sing praises to the two retiring commissioners.

Expectations of them had been high and somehow they failed to measure up.

A member of an election watchdog says the organization was disappointed in Sarmiento for keeping silent on the shenanigans in Comelec when Abalos was chief.

“He had the moral high ground, but he chose to be silent. Yes, he might be in the minority, but so were others before him,” the election watcher said.

As for Velasco, his departure from Comelec is welcomed by some Comelec personnel. “He was supposed to fight for the rights of the rank and file. But we found out he was the one blocking some reforms to improve the plight of the rank and file,” a senior staff said.

He was also perceived to have been soft on the “Hello, Garci “ election officials.

And so Sarmiento and Velasco are leaving the Comelec, but the Garci’s henchmen are still around—in fact, they may stay for some time, long after the two reformist commissioners are gone. – Rappler.com