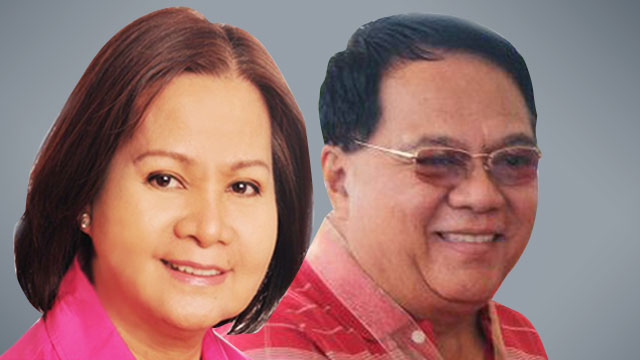 The alliance’s campaign sortie manager Henry Caunan told Rappler that while UNA is not allied with Pineda’s local Kambilan party, the governor is supportive of UNA.

Pineda, who is seeking re-election, will be running against former Pampanga Gov and priest Eddie Panlilio of the ruling Liberal Party (LP) for the third time. She lost to him in 2007, and defeated him in 2010.

Pineda’s only son, Dennis, a former mayor of Lubao town, is her running mate.

Pineda, who comes from Arroyo's hometown of Lubao, is married to alleged jueteng lord Bong Pineda and has been known to contribute to Arroyo's campaigns since she first ran for senator in 1995.

“As far as I know, Gov Pineda will support UNA candidates because of her closeness to VP Binay,” said Caunan, who used to head Binay’s political affairs office.

Before the 2010 elections, Caunan said, Pineda was “not too close” with Binay, but the two got to know each other after that because of their common friend, Candaba Mayor Jerry Pelayo.

Arroyo is also seeking re-election as representative of the 2nd district of Pampanga. The LP’s Vivian Dabu, a lawyer and provincial administrator during Panlilio’s term, is challenging the former president.

UNA only has a handful of candidates in Pampanga including 4 bets for vice mayor.

“We’re open to all possibilities. Of course, if we help each other, it will be good for us because we have no allies in Pampanga. It’s a natural thing to happen because we cannot ally with the local LP, but it depends, we will see,” he said.

Tiangco said UNA will still have to check if there is conflict between its local candidates and Pineda’s lineup under Kambilan.

Pampanga had 1,216,394 registered voters in 2010. Data from the Commission on Elections showed Aquino got 327,666 votes there while UNA stalwart former President Joseph Estrada only garnered 43,298 votes. 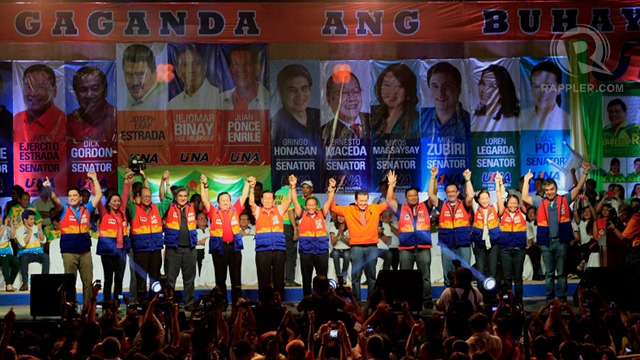 LUZON, THIS TIME. After holding its proclamation rally and sorties in Cebu and Bohol, UNA will focus on Central Luzon this week. File photo by Charlie Saceda.

Caunan said that, like Pineda, Ebdane agreed to host UNA in Iba, Zambales.

A former chief of the Philippine National Police (PNP), Ebdane was a close adviser of Arroyo, and was identifed as one of the implementors of alleged special operations to replace election returns in Batasan 9j 2005 to frustrate actor Fernando Poe Jr's electoral protest against Arroyo.

Ebdane is seeking re-election under the local Sulong Zambales Party. He will be in a one-on-one fight against former governor Amor Deloso, who is running under LP.

“We asked the governor if we can hold a rally in Iba, Zambales, and he said, ‘No problem,’” said Caunan.

“I talked to him and according to him, both PNoy (Aquino) and the VP are his friends. He was NoyBi in 2010. He said he might support some of our senatorial candidates but not all because he also made commitments to the LP.”

Like in Pampanga, Tiangco said UNA is open to an alliance with Ebdane’s Sulong Zambales Party.

“Whether it’s informal, we are open to all alliances as long as there is no conflict,” UNA’s campaign manager said.

Aside from Iba, UNA will visit Castillejos, and Olongapo City in Zambales.

‘GMA no longer in contention’

Tiangco said even if Binay and Estrada were fierce Arroyo critics, UNA does not make the former President an election issue, unlike the LP.

Aquino and LP leaders have often mentioned Arroyo in their campaign speeches, comparing the gains in the current administration to corruption under her watch.

Tiangco said, “Wherever we are, not just in Pampanga, we will not make her an issue. Why do you want to use a person who is not anymore in contention as an election issue, especially for LP which now has members and allies who benefitted from the Arroyo administration?”

The alliance is focusing on Central Luzon after holding its proclamation rally and sorties in Central Visayas last week.

"We have to cover as many bases as possible. We want to do that. That is the challenge," Tiangco said. – Rappler.com