Mitos Magsaysay: A critic of policies 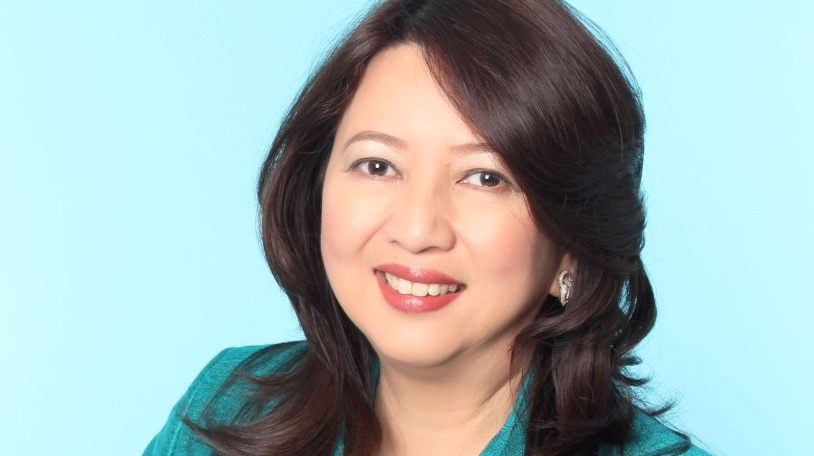 FISCALIZER. Mitos Magsaysay wants to focus on the oversight functions of the Senate. Photo from Magsaysay's Facebook account.

MANILA, Philippines – The joke in some circles is that, since Sen Miriam Defensor Santiago is ending her term this year, somebody as feisty as she should be elected to keep the Senate debates interesting, if not colorful. And so Mitos Magsaysay should be there.

The name of the Zambales congresswoman has become synonymous with the words “Aquino critic” and “Arroyo ally.” But not for Maria Milagros "Mitos" Magsaysay herself.

“Except it was not as popularly known [then] because I usually do my critiques inside the halls of Congress, meaning in committee reports, committee hearings, and that's where the critic comes out,” Magsaysay said.

Magsaysay claims Arroyo was “wary” of her when the latter was still president as she grilled some of Arroyo’s Cabinet secretaries during committee hearings. She even names a few she had been heads on with -- the late Angelo Reyes, Gary Teves, and Peter Favila.

She says she still does not know the cellphone number of Arroyo, now Pampanga representative, even if they are seatmates in the House of Representatives. She only sees her when her fellow members in the minority visit Arroyo in the hospital, where the former president is now under arrest.

“She's just my seatmate in Congress but there are a lot of debates I had with GMA when she was president. but since I was her ally, I was part of the majority, I did it in private and she knows that. Para ako yung anak na kung may outspoken kang anak. ako yun (I was like, if you had an outspoken child, that would be me),” Magsaysay says.

Magsaysay has since changed parties, from Arroyo's Lakas-Christian Muslim Democrats to Vice President Jejomar Binay's PDP-Laban. She is running for senator under the United Nationalist Alliance (UNA).

In her 3 terms as Zambales representative, Magsaysay also became at odds with at least 3 of President Benigno Aquino III’s Cabinet members.

She figured in a Twitter word war with Deputy Presidential Spokesperson Abigail Valte at the height of tropical storm Falcon in June 2011. Magsaysay posted tweets accusing Aquino of having poor disaster preparedness; Valte defended the administration.

In two separate budget hearings in the House, Magsaysay had a public spat with Communications Secretary Ricky Carandang and Budget Secretary Butch Abad.

In one hearing, she called Carandang “arrogant” and a “spoiled brat.” In another, she confronted Abad for withholding her district’s P70-M Priority Development Assistance Fund (PDAF) over the last two years.

But it seems Magsayay doesn't mind more of these scenarios in the future. She says she wants to focus on exercising the oversight functions of the Senate should she be elected, including calling for regular meetings in the Senate with agency heads.

“We're the only one given by Constitution who can do check and balance to the executive branch. We're the ones giving the budget. We're also the one who can really scrutinize and make sure that the Cabinet Secretary is implementing the policies based on the kind of budget that's being given. But we don’t do it, that’s why they get away with murder. Budget hearings are not enough,” she said.

The budget hearing with Abad became so heated that the legislator broke down in the middle of it all. She said her constituents were suffering because she didn’t have her pork barrel.

It appears that the issue on pork barrel and her constituents is an emotional topic for the usually fiery Magsaysay.

In an interview on Rappler’s #TalkThursday, Magsaysay also turned emotional when she spoke about her constituents being deprived of services because of the Aquino administration's withholding of her pork barrel.

“Because I remember how and where they are, how they are being marginalized right now. If ever there are tears in my eyes right now, it just goes to show how compassionate I am. Hindi ako pusong bato,” she said.

Magsaysay says she gives her constituents not what they want and only what they need -- rejecting requests for donations on projects such as basketball games.

She is proud of the fact that, she says, she is the only legislator in the history of Congress that has provided a free diagnostic clinic in her district. She says she has also provided free medical services and scholarships every day for the last 9 years, among other projects.

Beyond the tough exterior lies a woman and a mother who wasn't always Dragon Lady that she has become known for.

“Personally, I'm very cariñosa. I'm mabait. I’m respectful. I have a motherly concern,” she says. “But because I have to fight for my constituents and I see how government policy affects their lives, if you make a mistake in the policies, you see the effect. That's what made me become strong, when I start fighting for their interests," she says.

The lady surely knows how to fight. When Magsaysay got pregnant while she was still in college, she chose to continue her studies at the University of the Philippines.

A former classmate says this earned the admiration of many of Magsaysay's peers.

Before becoming a representative, Magsaysay was a “typical mother” to her kids – tutoring them on assignments, driving them to school and reviewing them for exams – aside from maintaining her fashion boutique business in Manila on the side.

“They're so maka-mommy. Even the guys a. My first four are guys. But when mommy says something, [they listen],” she said.

Two of her kids are now seeking elective posts in Zambales.

The 2013 senatorial race sees Magsaysay running against a relative and campaigning alongside a local political rival.

It is Mitos's husband, Jesus Vicente Magsaysay II, who belongs to a political family. He is the son of former Zambales governor Vicente Magsaysay. But the older Magsaysay saw that Mitos was the one more inclined to enter politics.

“He saw that I'm the one who has the patience and understanding to deal with the masa. And besides my husband is engaged in business. I wouldn’t want us to enter politics to make politics our business,” she says.

Her husband is engaged in the timber industry outside the country.

Mitos's being an in-law was the reference of Sen Franklin Drilon, campaign manager of the other senatorial slate, when he quipped that the “real Magsaysay” is Mitos's uncle-in-law, Ramon “Jun” Magsaysay Jr, who is running under the Liberal Party.

This particularly hurt Mitos since, in the history of Magsaysays running against each other, it has always been her branch of the family filing candidacies first, and Jun Magsaysay coming in later.

In 1992, Jun Magsaysay ran against Magsaysay's father-in-law, Vic, for vice president. In both times, according to Magsaysay, her uncle Jun filed his candidacy after a Magsaysay has already done so.

"The last time my father-in-law also filed his candidacy first as vice president and Jun Magsaysay again came in in the latter part. It's history repeating itself. We're not the one who came in last. He's always the one who always comes in when there's already a Magsaysay who filed."

This time around, Mitos had already announced her candidacy when Drilon convinced Jun Magsaysay to run, giving rise to speculations that it was meant to confuse voters and lessen Mitos's potential votes. 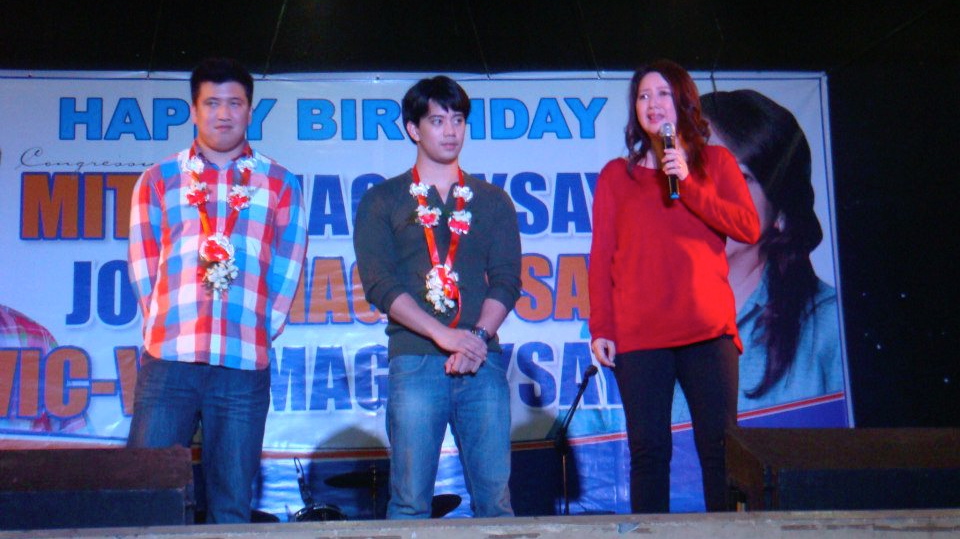 Meanwhile, Magsaysay belongs to the same party as former senator Richard Gordon even if their families are staunch rivals in Zambales.

In 2004, Magsaysay ran against Gordon’s wife, then Olongapo mayor Katherine Gordon, for Zambales representative, and won.

How does she handle sharing the campaign stage with her local rival?

In the #TalkThursday interview, Magsaysay said: “Im a very professional legislator. Whatever issues I have with the Gordons is only on the local level during election period. It just so happened that we are up against each other. But as far as im concerned, after the elections, they go their own way, I go mine. I do my own thing as a congresswoman and if Richard and I are here in UNA, there are some advocacies we can work together on because I never take things personally. You should never take things personally. It should always be for the public good."

Her sons' respective bids had her full blessing.

(Because most of those running against my children are the same old faces. One is a former congressman, whom they have already tried, and didn’t have as many projects as I had. So I felt it was a waste of opportunity. ‘Oh, no. If they are elected, they will get your funds again.’ The others are contractors, they just want contracts from the pork barrel. So I felt, ‘go on son, go ahead and run because I was afraid the services that they (constituents) are getting from us for free would be gone.)

Will she continue her free healthcare and education projects in her district if she and her son lose, and even if she's not in position anymore?

Magsaysay says that's the choice voters have to make. - Rappler.com 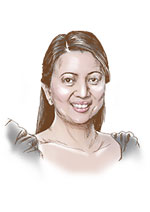