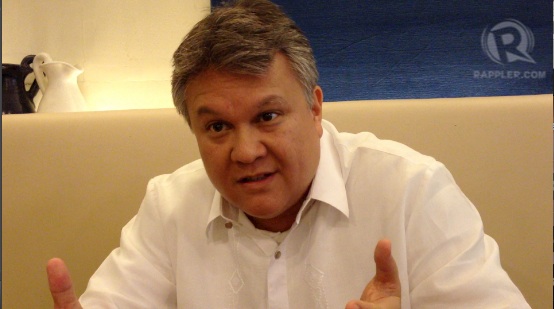 OUT OF CONTEXT. NPC provincial chairman and former Pangasinan Rep Mark Cojuangco clarifies statements he made regarding the status of the LP-NPC coalition.

As far as the province of Pangasinan is concerned, there is no partnership between President Benigno Aquino III's Liberal Party (LP) and his uncle Eduardo "Danding" Cojuangco Jr's Nationalist People's Coalition (NPC).

This is the sentiment of former congressman Mark Cojuangco -- the President's cousin and the NPC founder's son -- who believes the it is not the President but his "underlings" in the LP who are involved in the machinations against NPC's local candidates. He is chair of NPC in Pangasinan.

"As far as the local LP is concerned, we are the enemy," he told Rappler in an interview on Wednesday, February 20.

Cojuangco made headlines when he said Tuesday that the NPC would naturally be supporting its members and honorary members who are running for senator regardless of the slate they belong to.

He said that since there are already 5 of them -- Team PNoy's Loren Legarda and Chiz Escudero, UNA's Jack Enrile and Ernesto Maceda, and independent Ed Hagedorn -- and there are only 7 remaining slots, some of the administration's candidates will inevitably be excluded from the NPC sample ballots.

He went on to discuss the rivalry between LP and NPC in Pangasinan.

He said these comments were "hyped" and "taken out of context" in news reports as the NPC supposedly breaking off from the ruling coalition.

Cojuangco maintained that the coalition at the national level, which the NPC national leadership decides, is intact. "I'm only speaking about Pangasinan, where I'm the party chair, my area of responsibility."

Refusing to give names, Cojuangco said the LP and the President's "underlings" are doing the machinations. "There are underlings of the government who are using government power for their own personal advantage. They are picking on Pangasinan."

NPC is fielding re-electionist Amado Espino for governo of Pangasinan. The LP, on the other hand, is fielding former Alaminos mayor Hernani Braganza, whom Rappler's local sources believe is feeding the LP national leadership with the idea to play dirty tricks on Espino.

A Rappler source privy to the gubernatorial race in Pangasinan earlier said, "Napaniwala ni Nani ang LP na kaya niyang talunin si Gov, kahit kakaunti ang mayors nya, at maliit lang ang boto ng Alaminos." (Nani has convinced the LP that he can defeat the governor even if only a handful of mayors are supporting him and he comes from Alaminos with a small voters' population.)

Bragranza is a close friend of President Aquino and LP president Mar Roxas, who is also secretary of interior and local government. Shortly after Braganza was drafted as LP's gubernatorial bet, Roxas tagged Pangasinan as one of the poll hotspots in the May elections, an announcement that surprised Cojuangco.

A month after Pangasinan was declared as a hotspot, Roxas presented a former mayor who accused Espino of receiving jueteng bribe money. Recently, the administration presented another witness to implicate Espino, NPC congressman Jesus Celeste, and the governor of Zambales (another non-LP) in the murder of Infanta Mayor Ruperto Martinez.

How coalition was formed

Spokespersons of both parties denied the reports, with NPC spokesperson Valenzuela Rep Rex Gatchalian saying there are just "operational issues" in the local level that needed to be ironed out.

The President himself has dismissed reports over the LP-NPC issue.

"I had the chance to talk to my uncle Henry Cojuangco (brother of NPC founder Eduardo "Danding" Cojuangco Jr), the head of the coalition in the House. He reassures me that there is no change in the relationship," Aquino said.

Cojuangco said that while he doesn't speak for the party, he will make his sentiments known to the NPC leadership, as well as the President.

@tor_vicWell that is true. But I'll definitely make my sentiments felt next chance I get 2talk2 D leadership!PNoy doesn't need LP 2govern!

Roxas on Wednesday said the arbitration committee of the LP and the NPC agreed on two things: a nationwide mutual support for the senatorial slate; and common slates on "roughly 80% of the constituencies and agreement to disagree on the balance."

"So just because there are competing slates at a few of the local areas does not mean that the coalition agreement at the national level will be affected," Roxas said.

What the LP might have overlooked is the unwritten rule in the Cojuangco clan that even if they belong to different political camps, each side would not meddle in the other's bailiwicks, sources close to the family say.

Danding Cojuangco's areas -- dominated by NPC -- would be Negros Occidental, certain parts of their home province of Tarlac, and Pangasinan.

In Tarlac and Negros Occidental, LP didn't field candidates against NPC gubernatorial bets. In Pangasinan, the LP fielded a challenger against NPC's Espino.

Mark Cojuangco said there was an agreement early on to leave Pangasinan to NPC -- "May usapan noon" -- that's why he was surprised by what LP has been doing against NPC's local candidates.
"What bothers me is the President won in Pangasinan, and his vice presidential candidate (Roxas) was right behind him. He won by quite a margin," he added.

In 2013, Pangasinan has the third biggest voters' population among the provinces, with 1.65 million voters.

Cojuangco doesn't expect the President to get involved in the details of provincial fights, but wants the administration to put a stop to the dirty tricks.

"We want to win on our own merits. If we can't do that, then we have no business being there. All I'm asking for is a level playing field," he said. - Rappler.com