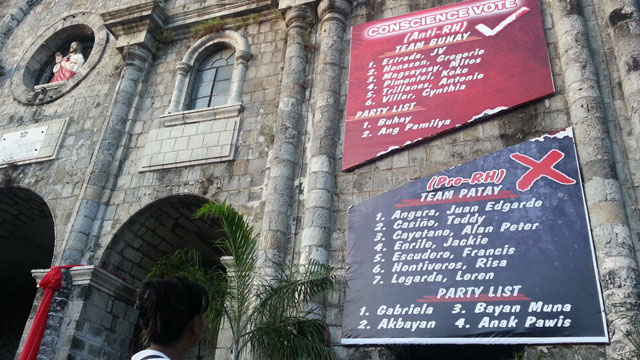 DEFYING COMELEC. The Bacolod Diocese cuts its oversized poster into half. Photo by Charlie Saceda

MANILA, Philippines - So what if it's been cut into half? It's still illegal.

It's the second letter from the Comelec to the diocese regarding the 6 feet by 10 feet tarpaulin hanging at the San Sebastian Cathedral, Brillantes said.

Hung with one below the other outside the cathedral, the "conscience vote" material in effect looked the same as the original one-piece vertical tarpaulin. On top is the list of "Team Buhay" of 5 senatorial candidates and 2 party-list groups, and below it is the "Team Patay" of 7 senatorial aspirants and 4 party-list groups.

"Team Buhay" includes the senatorial hopefuls who, in their capacity as congressmen and senators, voted "no" to the RH bill, which became a law despite the Church's opposition. The anti-RH solons are JV Estrada, Gringo Honasan, Mitos Magsaysay, Koko Pimentel, Antonio Trillanes, and Cynthia Villar. Also endorsed by the diocese are party-ist groups Buhay and Ang Pamilya.

The diocese maintains that the poster is not campaign propaganda since it's part of the Catholics' advocacy against the Reproductive Health Bill.

Brillantes disagrees. "What I'm saying is that they should dissent. If you are endorsing a product na andun ang mukha ng senator, that is propaganda by the definition of the Supreme Court. Heto, andun ang pangalan ng mga senador, sinasabi nyo ang Team Patay, Team Buhay, that’s an endorsement of candidates. Ginagamit nyo ang advocacy as a result," Brillantes told reporters.

While campaigning for or against a candidate is allowed, doing it through oversized or inappropriately displayed materials can be a ground for being charged with an election offense. - Rappler.com