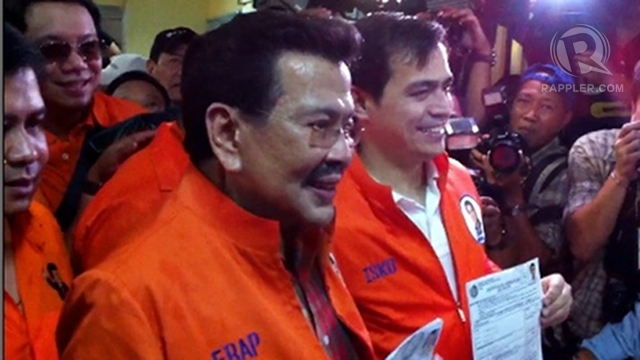 MANILA, Philippines – Former President Joseph Estrada hurdled yet another obstacle to his mayoral bid in Manila after the Manila Regional Trial Court dismissed on Monday, March 4, the disqualification case against him.

Judge Marivic Umali dismissed the disqualification case filed against Estrada by two Manila residents less than 3 months ago. Not a single hearing was conducted.

Estrada has one disqualification case pending, this time before the Commission on Elections (Comelec). Like the RTC case, it argues that the pardon from plunder that Estrada got from President Gloria Arroyo makes him uneligible to run for office again.

Estrada ran for President again in 2010, and this argument on his pardon was raised, but the Supreme Court didn’t act on it. This year, Estrada is running against re-electionist Manila Mayor Alfredo Lim.

Pardon not an issue

Last December, two Manila residents filed for a declaratory relief, questioning the validity of Estrada’s candidacy. The petitioners wanted the court to issue its interpretation on the presidential pardon and nullify Estrada’s mayoral bid.

Estrada was convicted by the Sandiganbayan for plunder but Arroyo quickly granted him presidential pardon. A provision in the pardon stated that “Estrada has publicly committed to no longer seek any elective position or office.”

But Chavez, in his motion to dismiss the case, argued that such provision in the pardon “is not a condition but only a preliminary statement.”

He argued that the dispositive portion of the pardon, which states that Estrada’s full civil and political rights were restored, expressly allows him “to vote and be voted upon.”

Chavez said the court also ruled in favor of his arguments that the petitioners – who claim to be Tondo residents – have no standing to file the case since their rights are not violated in the first place.

The pardon granted to Estrada, he said, was between Arroyo and his client, and not between the petitioners.

Previous attempts to disqualify Estrada in the Supreme Court and the Sandiganbayan have failed and the RTC ruling merely echoed the previous rulings. The favorable rulings allowed Estrada to run for the presidency in 2010, where he placed second to President Aquino.

Chavez said the latest RTC decision leaves only the case filed in Comelec as the only roadblock to Estrada’s mayoral bid.

The Comelec case may prove to be Lim’s last trump card to derail Estrada’s bid.

Estrada’s camp has expressed fear that two commissioners are yet to be appointed by President Benigno Aquino III, and they could tilt the balance in Lim’s favor.

There are two vacancies in the poll body awaiting to be filled up by President Aquino. Lim is the candidate of the ruling Liberal Party.

But Chavez said the Comelec is bound by its earlier ruling in 2010 that allowed Estrada to seek public office, dismissing suggestions that the new composition of the Comelec could affect Estrada’s candidacy. – Rappler.com