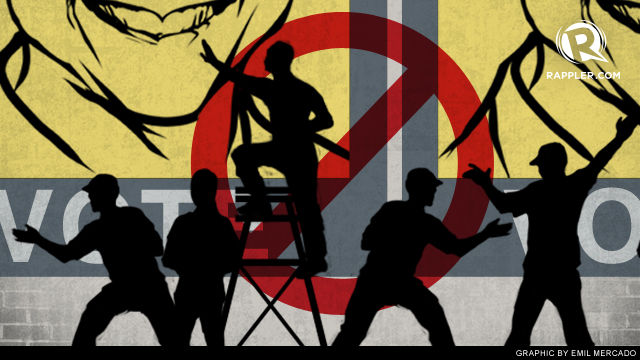 MANILA, Philippines - Three groups might face disqualification from the party-list polls in May after having repeatedly violated rules on campaign propaganda.

Commission on Elections (Comelec) spokesperson James Jimenez posted on his Twitter account on Monday, May 11, that the groups Kabataan, Piston, and LPGMA were served subpoenas after failing to remove their illegal campaign posters even after receiving written warning several times.

Jimenez said that these groups are set to attend a hearing on Friday, March 15, for the possible cancellation of their accreditations.

"If stripped of accreditation, Kabataan, Piston, LPGMA will no longer participate in the May 13 polls. Any votes they get will be stray," Jimenez said.

LPGMA and Kabataan have already received 4 notices each since March 4 regarding their illegal posters. Comelec chairman Sixto Brillantes Jr said that these groups have so far received the most number of notices sent to a party-list group.

In an earlier report, though, Kabataan partylist group president and general counsel Terry Ridon said that they had already complied with Comelec's notice.

Comelec Resolution No. 9615 specifies that campaign paraphernalia could not be posted "outside authorized common poster areas, in public places, or in private properties without the consent of the owner." A campaign poster at a common area also should not exceed 2 feet by 3 feet, while a poster or sign board at a campaign headquarter should not exceed 6 feet by 8 feet.

The candidates are given 3 days upon receipt of the notice to take down their unlawful campaign materials. Otherwise, the Comelec will initiate election offense charges against them, which may lead to their disqualification.

"I am not joking when I said candidates/party-list groups will be disqualified/cancelled if campaign rules will be disegarded," Brillates said in a previous tweet. - Rappler.com