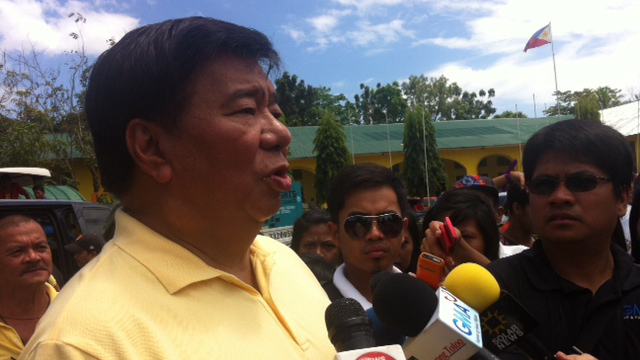 This was Team PNoy campaign manager Franklin Drilon's reaction when asked about the bungled appointment of an ally, Macabangkit Lanto, to the Commission on Elections (Comelec). Drilon was interviewed by reporters on the sidelines of a sortie here in Catanauan town.

Drilon declined to comment further on Lanto, who he recommended for the post. The two used to work together and are fraternity brothers (Sigma Rho). Lanto has been hounded by controversy, however, after he was unseated as Lanao del Norte's second district representative in 1994 due to alleged poll fraud.

Government insiders earlier told Rappler that Drilon was among key Liberal Party officials who recommended the appointment of Lanto to President Benigno Aquino III. Drilon once lobbied for him to become officer in charge of the Autonomous Region Muslim Mindanao; the President eventually picked Mujiv Hataman.

Drilon said there is nothing more to talk about.

"He has already quit, he has withdrawn and declined to accept the nomination," said Drilon. "That's a decision he felt was something he had to do to put an end to an issue without any basis."

The United Nationalist Alliance (UNA) is not about to let Drilon go, however.

“Although we commend Macabangkit Lanto’s decision to graciously decline his appointment to the Comelec, the story does not just end there. Drilon should also explain his role in the selection process. Sa kagustuhan nilang manguna sa 2013 at 2016, kailangan nilang maniobrahin ang Malacanang para maipasok ang mga tao nila sa Comelec. The imprimatur of the Balay Group of the Liberal Party is clearly seen everywhere,” UNA secretary-general Toby Tiangco said in a statement.

He asked Drilon to "own up to misleading President Aquino on the tainted background" of Lanto, and apologize for "placing the President in an embarrassing situation" by appointing Lanto.

In a statement, Lanto said he "arrived at this decision owing in large part to the controversy that surrounded my appointment." His decision comes days after election lawyer Mara Bernadette Sardillo also turned down her appointment to the Comelec.

Showing exasperation over the issue, Drilon denied to say whether he was consulted by Lanto before his decision to decline the post.

"I think we put that behind us now," he said.

Asked to comment on Lanto's decision to decline his appointment, UNA senatorial candidate Richard Gordon said: "It shows poor research on the part of the Palace." The appointment of administration allies to the poll body indicates a plan to influence the results of the May elections, Gordon told a health forum in Pasay.