No big rally for UNA in Pablo-hit areas 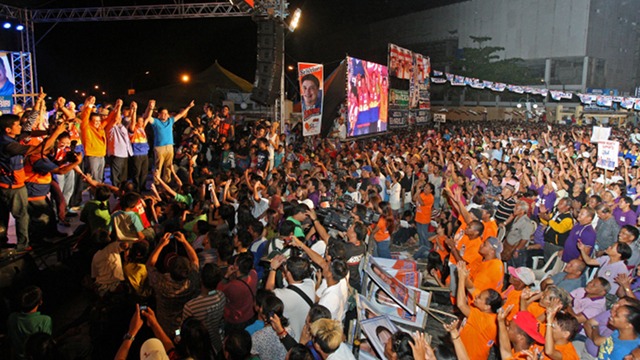 NO BIG RALLY IN COMVAL. In a break from its usual campaign, UNA will not hold rallies in Compostela Valley and instead conduct public market visits in the province hard hit by Typhoon Pablo. File photo of UNA's Cagayan de Oro rally courtesy of UNA

DAVAO CITY, Philippines – The opposition will tone down the campaign pitch as it visits areas ravaged by Typhoon Pablo.

Senatorial candidates of the United Nationalist Alliance (UNA) will begin the second leg of its Mindanao campaign in Compostela Valley, one of the provinces hardest hit by Pablo in December 2012.

Instead of the usual rallies, UNA will just hold whistle-stop tours in public markets in Maco, Mabini, Pantukan, Monkayo, Montevista, and Nabunturan towns in Compostela Valley, and in Tagum City on Tuesday, March 18.

“The candidates will just visit the places to find out the real condition in the areas. Hindi kasi magandang tingnan na magra-rally sila doon tapos bawal din naman silang mamigay ng mga pagkain dahil baka sabihin ng Comelec na vote-buying,” Caunan said in a phone interview. (It won’t look good for them to hold rallies there but they cannot give out food because Comelec might say it’s vote-buying.)

What happened to special polls?

In December, the disaster management chief proposed that special polls, later than May 13, be conducted in the 6 provinces hit by Pablo. Rappler reported, however, that this could be tricky for the poll body since the combined voters' population of these provinces -- more than 2 million -- could affect the last few slots in the winning circle in the senatorial race.

Compostela Valley is UNA’s first stop in its Southern Mindanao campaign. The visit comes 3 months after Pablo devastated the province and other areas in the region, and weeks after survivors protested the allegedly substandard delivery of relief services in their towns.

In their visit to Northern Mindanao two weeks ago, some UNA candidates criticized the Department of Social Welfare and Development (DSWD) over the issue.

Yet the UNA senatorial candidates will be on their own in this leg, with Binay, Estrada and Senate President Juan Ponce Enrile all unable to make the trip.

Binay is in the Vatican for the papal inaugural Mass. Estrada is resting from the Baguio sortie while doctors advised Enrile to take a break from campaigning because of his eye problem.

Despite the absence of the so-called 3 kings and the scaled down Compostela Valley tour, Caunan said UNA will go all out in its grand rally at the Rizal Park in Davao City on Wednesday, March 20.

“The UNA rally will be bigger than the Liberal Party’s rally here,” Caunan said, referring to the visit of President Benigno Aquino III and his Team PNoy senatorial slate in Davao City earlier this month.

Caunan’s confidence is rooted in the success of the Estrada-Binay tandem in Mindanao, the so-called Erap country.

The largest city in the Philippines in terms of land area, Davao City has 967,944 registered voters for the May 13 polls.

“We cannot stress enough the strategic importance of Mindanao to the country’s future and Davao City in particular which has become a shining beacon of peace and order as well as cooperation between the public and private sectors,” said UNA campaign manager Navotas Rep Toby Tiangco in a press statement.

UNA has no formal allies in Davao City, and only a few city councilors will host its rally.

The Dutertes, which have long been running the city, are now running under the local Hugpong party. In 2010, Vice Mayor Rodrigo Duterte was a candidate of the ruling Liberal Party and endorsed the Aquino-Roxas tandem.

Before becoming vice mayor, Duterte was a mayor of Davao for about two decades. Dubbed “The Punisher,” he is notorious for hardline tactics against criminals, earning him both admirers and critics. He is now running to reclaim the post now held by his daughter, Sara. His councilor son, Paolo, is running unopposed as his running mate.

Still, Caunan said UNA will rely on a strategy the alliance is also banking on in other provinces: personal relationships.

“[Vice] Mayor Duterte is a friend of VP Binay. Whenever the VP goes to Davao City, they meet,” Caunan said.

Caunan added that Binay and Duterte go way back as original members of the Partido Demokratiko Pilipino-Lakas ng Bayan (PDP-Laban). The party Binay heads was founded in Mindanao.

UNA will be visiting these places this week as well as Sultan Kudarat, Koronadal City, North Cotabato, and General Santos City.