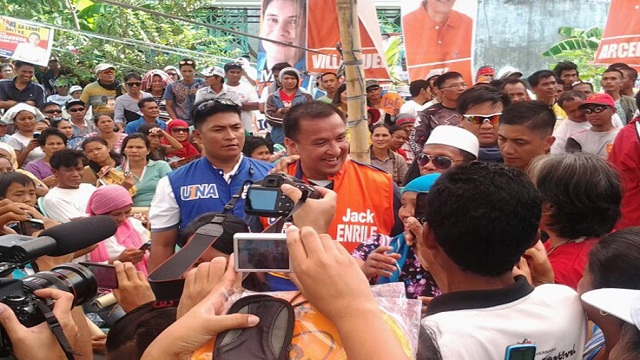 UNA TERRITORY? The candidates, like Jack Enrile (in photo), are not worried about small crowds. Region 12 has always gone for opposition senatorial slates. Photo by Boyette de la Cerna

SULTAN KUDARAT, Philippines – In the region that they claim to be their stronghold, the United Nationalist Alliance (UNA) mounted campaign sorties on Friday, March 22, that were only as unimpressive as their rival Team PNoy’s whirlwind stops here two weeks ago.

They failed to hold an indoor rally at the Capitol Gym in Isulan. While Sultan Kudarat Gov Teng Mangudadatu is a member of UNA, he was not around to welcome the senatorial candidates.

Instead, they motored to Tacurong City and held a rally in an open field on the Southern Mindanao Institute of Technology campus, where a sixth candidate, Migz Zubiri, caught up with them.

The crowd was way below everybody’s expectations – barely 1,500 showed up – but they gave the candidates a warm welcome. By noon, more than half of the crowd had gone.

The crowd was slightly bigger in Koronadal City, South Cotabato, but didn’t go beyond 2,000. Gov. Arthur Pingoy was on hand at the Rizal Park to welcome them.

Soccsksargen, however, remains an Erap country.

UNA stalwart Joseph Estrada won in Sultan Kudarat, South Cotabato, and General Santos City when he first ran for president in 1998. Estrada even beat Benigno Aquino III in the 2010 presidential elections in these areas.

Region 12 has also consistently given the opposition a majority win in all Senate races since 1992.

In General Santos City, where UNA candidates will campaign on Saturday, March 23, the stage might become a bit uncomfortable for their local allies.

Estrada is very close to Adelbert Antonino, father of incumbent General Santos City Mayor Darlene Antonino-Custodio. He was Estrada's unofficial liaison officer to the Senate during the former president's impeachment trial. He was also said to be a drinking buddy of Estrada’s.

UNA senatorial bet JV Ejercito-Estrada, son the former President, himself admits that he is close to Custodio since the latter was congresswoman.

The problem is, Custodio is effectively the candidate of the administration coalition. Team PNoy includes her party, the Nationalist People’s Coalition. UNA candidate Jack Enrile is, in fact, her party mate.

UNA has an official candidate for mayor against Custodio, Ronnel Rivera. Theirs is a one-on-one battle.

The Pacquiaos are with UNA. - Rappler.com