The 4th Estrada gears up for the Senate 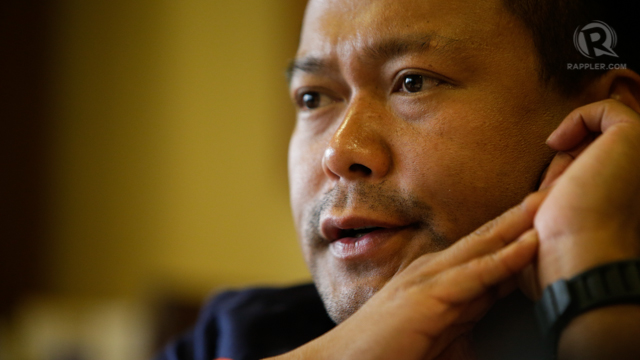 MANILA, Philippines - “My father’s life is an open book. Whatever shortcomings he had for his children, he always makes up for it in some other way. That’s why I never felt insecure. Do you think I’m insecure? No, I’m not.”

It’s the 25th minute of the interview and it was getting uncomfortable. United Nationalist Alliance (UNA) senatorial bet Joseph Victor “JV” Ejercito didn't hide his displeasure when asked about the complicated relationships between the different families of his father, former President Joseph “Erap” Estrada.

JV would rather talk about his own accomplishments as San Juan Mayor for 9 years and as San Juan representative for the last 3 years. He has a track record he is proud of and he wants the media to focus on them.

But there’s no running away from the issue. If he wins in the May elections, he will not only become the 4th in the Ejercito-Estrada family to become a senator. He will be the 2nd Estrada in the 16th Congress, joining his half-brother Senator Jinggoy Estrada in the 24-member powerful chamber.

Senator Jinggoy is Erap’s son by wife, former Senator Loi Ejercito Estrada. JV is his son by his former leading lady and now San Juan City Mayor Guia Gomez. His relationships hounded Erap when he was president. The issue continues to hound both his sons now.

But when Erap became president in 1998, his wife Loi was his First Lady.

Always very candid, JV admits he and his half-brother are not very close. But they’re both willing to set aside their differences because they love their father. JV recalls how Erap had a heart-to-heart talk with the two of them, telling them that he’s not getting any younger.

“To be honest, we are not very close. I guess both of us realized later on that we love our father very much and he’s not getting any younger. He’s 75. He reminded us that most of his siblings died at 77, 78, or 81. For the sake of our father, at least we are not fighting anymore,” he told Rappler. 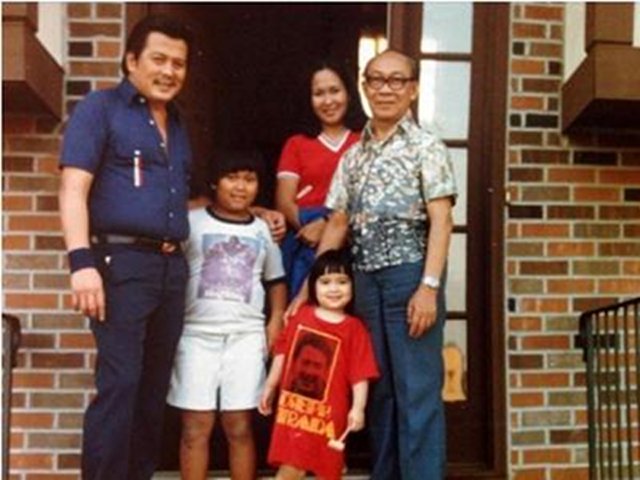 The family may have settled their differences, but the public discourse against political dynasties continue.

JV Ejercito is the 4th in the family to seek the Senate, following Erap, wife Loi Ejercito, and son Jinggoy.

JV is tired of the issue, too. "Probably, those criticisms come from people who don’t have a chance of winning or making it to politics. We are a democratic society. We have to leave it to the people to make the final decision on whom they want to vote," he said.

"We cannot blame children for following the footsteps of their parents. We have families of doctors, lawyers, even media people, even actors and actresses, especially in the military," he added.

"Let’s put it the other way around. There is a good public servant, a good mayor or a good congressman. Just because of his name, he would he be deprived of running? Just because some members of society are against dynasties? As long as you do not use coercion, you do not use force, guns, goons, and gold," he continued.

But we asked him. Is it healthy that the same surnames go in and out of the Senate?

"I don’t know. It’s just now that probably it’s a coincidence that common, popular names are getting elected. Let the people decide. If they think we belong to a bad dynasty, then they would not vote for us. I'm not going to run for the Senate if I only have my father’s name as my weapon. I think I’m an accomplished mayor, a TOYM (Ten Outstanding Young Men) awardee, one of the more prolific lawmakers. I think I have the capacity to become a senator," he said. 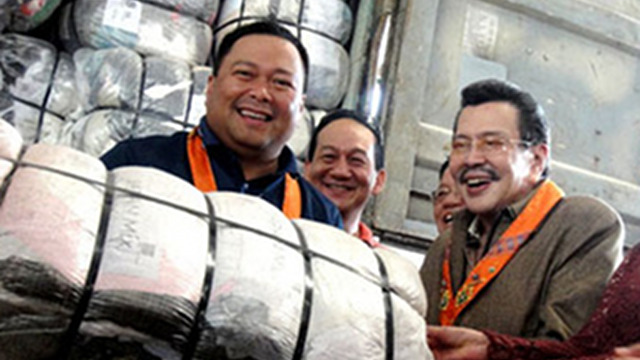 JV thinks he can win without his father, but he echoed accusations by UNA candidates that some cheating will happen to favor the administration candidates.

"I think I will. In the survey, I rank from 7-9 even if I use JV Ejercito. When I added Estrada, the ranking improved. I am not an ambitious person. I am not aiming for the top. I just want to make sure, since I'm not in the administration party, that I maintain that safe level, that I rank high so that in case they operate to help some of their candidates, I'm already safe," he said.

JV suffered a slide in the polls conducted after the start of the official campaign period on February 12, but he has since recovered to take the 3rd spot in the latest SWS survey.

One of his strategies to improve his standing is to adjust his name to include Estrada -- his father's popular movie screen name. In the ballot, his name is "JV Ejercito Estrada."

It's a well studied move. JV's camp noticed he's not doing so well in Mindanao -- a known bailiwick of his father. They tested it. When they added Estrada to his name, he said his ratings jumped.

"It's probably 30%, probably even 50%. I don’t think that it is enough to make you win. With the influx of young voters right now, the electorate are intelligent. They will look at credentials, track record, performance," he said.

It is not meant to deceive the voters, he said.

"I could have used my name. My real name is Joseph Estrada," he said.

JV is most proud of his track record as mayor of San Juan, a position he served for 3 terms or a total of 9 years. He said it was only by accident that he entered politics.

"My father wanted me to become a successful businessman, but circumstances forced me to enter politics in 2001. My brother’s term was ending. My father was a victim of conspiracy. I was tasked to carry the torch of the family, so to speak," he said.

Since Erap, San Juan has been ruled by his family for decades. The city is doing well. It tops the Department of the Interior and Local Government’s Local Governance Performance Management System (LGPMS).

The LGPMS is a way of measuring a local government unit (LGU) in terms of financial accountability, economic management, and other key aspects of governance.

JV is even prouder that it was in his watch that San Juan achieved cityhood.

"Modesty aside, I think we will take very long if we discuss my accomplishment as mayor. I started as mayor in 2001 when it was not the best of times -- the time that Arroyo took over the reins of power. I had no support from national government. But because of my determination, I wanted to prove we can rise and we can develop without the support of administration," he said.

"We professionalized and practised transparency. Investment just came in. I was lucky I came from the corporate world. I know what businessmen wanted. We were able to understand each other right away," he added.

"I'm very proud of this. We are the LGU with the lowest poverty incidence. Kami pinakakonting bilang ng mahihirap. That would be your biggest success. It's not only the beautiful infrastructure, bur for you to be able to uplift the living condition of your people is the biggest accomplishment any leader would be proud of," he said.

JV won a seat in the House of Representatives when his third term as mayor ended in 2010. 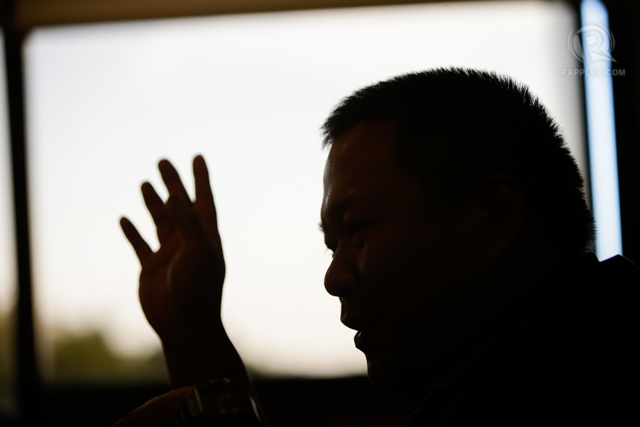 JV's votes show how he thinks as a politician.

He voted against the sin tax law. "I would support any measure increasing revenue for government, but there's no comprehensive alternative plan for tobacco farmers who will be displaced. A lot of our tobacco farmers will be affected, 1 million to 1.5 million tobacco farmers including dependents. Being a representative, I pity those from La Union, Isabela, Ilocos Sur, and other regions."

He also voted against the reproductive health law."I did not vote for it although I'm very much torn. I believe in the measure because I really believe that our county’s population growth is growing too fast. Even my father was very much pro-RH. In the end, when it comes to voting I have to weigh everything. I was also educated in a Catholic Jesuit institution. Of course, the doctrine will always play a big part in my decision. I voted no to the RH bill."

Given his stint as a lawmaker, JV says he prefers the executive position. "I have to be honest, I'm more comfortable as executive because I'm a visionary. As executive, you have to have plans. You can see it done right away. You could see the fruits of your labor," he said.

But he looks at the senatorial race as a challenge. "Since there’s a clamor from Filipino people, I would try to live up to the challenge."

"I was one of the known figures of the opposition. The anti-GMA (Gloria Macapagal-Arroyo) sentiment was quite high. I ranked 5th-9th. Had I ran for the Senate at that time, I would have made it also," he said.

His father asked him to withdraw his senatorial bid to accommodate the Liberal Party (LP), which wanted two slots in the senatorial ticket of the Genuine Opposition then.

"At that time, we wanted a broad coalition of anti-GMA forces to be together. My father and I decided that I would be withdrawing my candidacy to accommodate people from other parties. The LP, for instance, only had then senatorial candidate Noynoy Aquino. They wanted to give them 2 positions, one for Sonia Roco. I had to give way for a more united opposition," he explained.

"It was a big sacrifice. I have to admit that I had a heavy heart," he said.

Six years later, it's the same Liberal Party that is going against his senatorial ambitions. JV laments how the LP is running a negative campaign against UNA candidates to achieve its 12-0 victory.

His father's name -- and his own track record -- will be tested in May. - Rappler.com