Batangas in 2013: Gearing up for Holy War 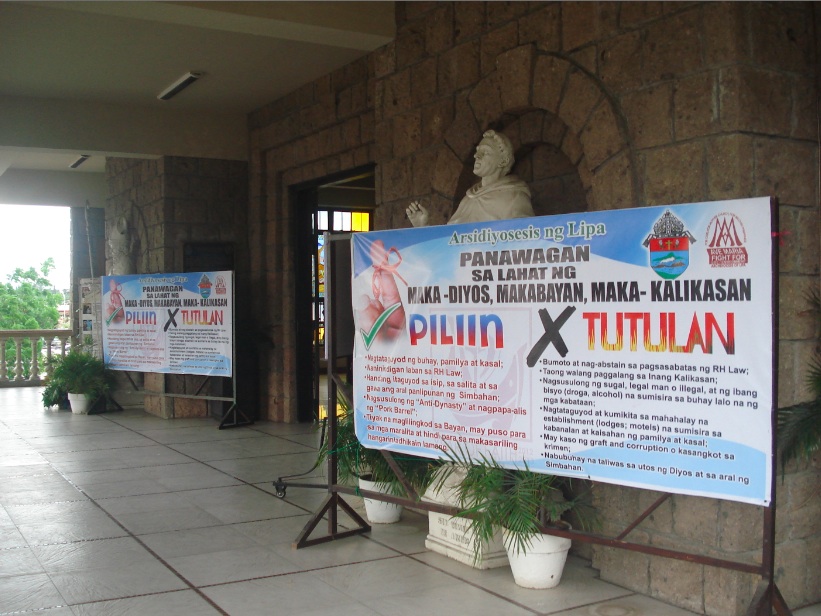 SUNDAY REMINDER. There is no missing the election-related message at the entrance of the Sto. Niño Church in Lipa City. Photo by Loreto Guinhawa

LIPA CITY, Philippines – It is the Catholic Church’s version of the Crusades – less gory but potentially bloody just the same. In the absence of bitter political races in this year’s midterm elections in the province of Batangas, it is the local Church that wants to draw blood for what it perceives as attacks on the faith.

It looks like it will be a walk in the park for the incumbents, if one is to gauge their political rivals. Re-electionist Gov Vilma Santos-Recto is being challenged by two independents. Two of the congressmen – Tomas Apacible (1st district) and Sonny Colantes (3rd district) – are running for re-election as well, each with 2-3 rivals who can split the opposition vote further.

In the 2nd district, Hermilando Mandanas is finishing his last term. Among the 3 who are seeking to replace him, provincial board member and popular actor Christopher de Leon appears to be leading. In the 4th district, re-electionist Mark Mendoza will be in a one-on-one race against Bernadette Sabili, wife of the mayor of Lipa.

But elections will not be boring in Batangas. For the senatorial contest at least, the local Catholic Church will provide the tension here. It is bent on working against pro-reproductive health (RH) candidates.

Extension of the RH battle

At any given day, a group of elderly men and women go from house to house, asking residents to spare some time to hear their message.

One can easily spot them, by the red ribbon they wear – their answer to President Benigno Aquino III’s yellow ribbon in the 2010 presidential campaign.

The red ribbon is attached to or pasted on their vehicles, or worn like a badge of honor on their outfit. The red ribbon is the insignia of anti-RH advocates. Red symbolizes blood and life, against which the RH law will work, they say.

After exchanging pleasantries with whoever opens the door to them, the group talks about the coming elections and the importance of choosing national candidates wisely. They talk about their faith and the sustained attacks on the Church by some legislators.

Finally, they ask the residents to add their names to a signature drive. If they sign, it will be some sort of a promise that they will vote for senatorial candidates whom their lay leaders will choose. The list of candidates will have the final imprimatur of Archbishop Ramon Arguelles.

“Their signature in the petition binds them to support whoever the Church chooses among the senatorial candidates,” said Loreto Guinhawa, president of the Lipa archdiocesan Council of the Laity. “We’re aiming to cover as many houses as we can and gather as many signatures as we can.”

Guinhawa said the door-to-door campaign and the signature drive are being replicated in all the 7 vicariates under the archdiocese, consisting of 58 parishes. The signature petitions are also spread out in churches, to cover the churhgoers on Sundays.

In the staunchly Catholic Batangas, the lay campaign is as easy as it gets.

From bottom to top

The lay initiative in Batangas stands out in many ways:

Based on the 2010-2011 Catholic Directory of the Philippines, there are about 2.13 million Catholics in Batangas, out of its 2.38 million population. That 89-percent share is higher than the national 81%.

The center of Church power in the province is the Lipa archdiocese, under Arguelles, who was appointed here in 2004. Directly under him are 170 priests and more than 20 local lay groups.

With devout and loyal followers, the archdiocese is an extremely effective army that even local politicians have recognized.

Under the baton of Arguelles, the 4 congressmen voted against the controversial RH bill on second reading, making Batangas the only province that solidly voted as the Church wished. The representatives of two party-list groups based in Batangas – Agap and I-CARE – also voted against the RH bill.

(On the third and final reading, however, Rep Collantes abstained. Arguelles interpreted that as a vote for the RH bill.)

Months before the voting, Arguelles had secured the “no” votes of the Batangas congressmen. This was despite the fact that 3 of the House members here belonged to the ruling Liberal Party, which pushed for the bill. It was a testament to the Church’s clout in local politics here.

In the Senate, Arguelles secured a vow from Senator Ralph Recto – a former Batangueño congressman and husband of the governor – to vote against the RH bill. In the final voting, however, Recto went in favor of the measure, prompting Arguelles to feel “betrayed” by the lawmaker.

In an interview, Recto said he was initially against the RH measure, but changed his mind after a number of his proposed amendments, which watered down the measure, were approved. In effect, “It was as if no new law has been introduced [because] what the law contained are already being implemented [through existing laws].”

Recto’s volte face notwithstanding, Batangas has proven with its RH vote that it is more Catholic than Manila, where the seat of Church power is located, or than Cebu and Pampanga.

How did the Catholic Church here pull it off?

It wasn’t primarily due to Arguelles’s convincing skills but to lay groups’ willingness to devote time, money, and effort to pursue its mission. With the archbishop’s go signal, they closed ranks and came up with a strategy to demonize the RH law and its supporters.

Days after the Bacolod diocese in Negros Occidental came up with Team Patay tarpaulins that list down the senatorial candidates that parishioners should reject, lay leaders met with Arguelles to map out their own strategy in Batangas.

Unlike in Bacolod where the initiative came from the top, the one in Batangas starts from the ground.

“It’s the laity who’s taking the initiative, but they ask the support of the bishops and the priests. In my case, I am very much at the center of their efforts. I encourage them very strongly. And maybe they wish that other bishops would do the same,” Arguelles said.

Outside the Sto. Niño Church in Barangay Marawoy, Lipa City, a politically loaded tarpaulin hangs prominently near the altar. No churchgoer would miss it – it is posted just below the responsorial psalm board. Such act might have been considered improper or even blasphemous at some other time, but these are no ordinary times.

The tarpaulin lists the qualities of candidates that churchgoers should consider before casting their vote. To avoid falling into the trap of a single-issue campaign, lay leaders expanded the issues beyond the RH issue. Essentially, Guinhawa said candidates are weighed based on the LASER test—lifestyle, action, supporters, election activities, and reputation.

“We do it subtly so the people can understand where we’re coming from…. The right candidates are those people who will be qualified based on the criteria we have set,” Guinhawa said.

Conrado Tejada, the communications officer of the Lipa archdiocese, said all parishes in Batangas will display the tarpaulin inside the churches and outside the church premises. Each tarpaulin costs P600, paid for by lay leaders. “No church money is involved here,” he was quick to clarify.

Unlike in the Bacolod diocese, the Church in Batangas does not identify particular candidates to vote for or against in its tarpauilns. But as the election nears, it will distribute pamphlets to churchgoers and voters containing the names of candidates who should be supported or rejected.

“When the elections are near, we will be giving names,” Arguelles said.

Based on their criteria, it appears only a few will be included in the list of favored candidates.

But this early, the 3 senatorial candidates of Ang Kapatiran party, led by former presidential candidate JC de los Reyes, as well as United Nationalist Alliance (UNA) candidate Mitos Magsaysay can be expected to make it in the list.

The Ang Kapatiran bets have run on a platform that adheres to Catholic teachings. As for Magsaysay: “She has always been with us on moral issues. She always fought for it at great risks,” Arguelles said.

In contrast, two of the leading senatorial candidates – Loren Legarda and Francis “Chiz” Escudero – won’t make it to the list that the Church is preparing. The Church and the laity “disapproved” these candidates not only because they backed the RH law, but also because of their respective matrimonial state, Tejada said.

“These candidates, they are anti-life, they’re anti-family. We know the lifestyle of the two. They were both separated from their spouses. So why should we vote for them, based on our Catholic faith?” Tejada said. 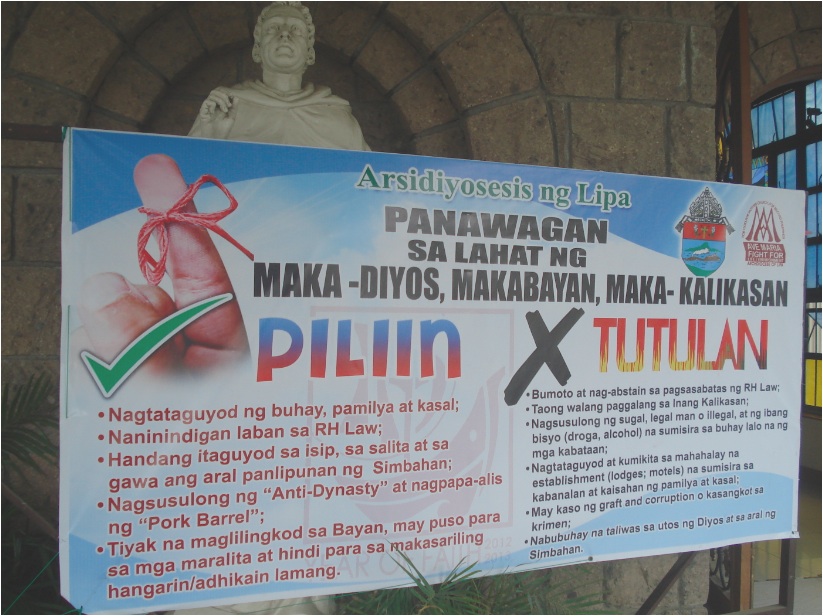 In the 2010 presidential race, Batangas went for Aquino, giving him 60% of the total votes cast in the province. Estrada was a far second, getting only 17% of the votes.

For the mid-term polls, this province of about 1.4 million voters was the first provincial stop of Aquino’s Team PNoy after they kicked off their senatorial campaign on February 12. But the President was a no-show here – a fact that did not escape Arguelles.

“He was expected to come here but he did not, because he knows that Batangas is pro-life. I think maybe Senator Recto was not able to convince him that Batangas is safe for him,” the bishop said.

Lay groups are also assessing UNA candidates and their stand on issues. Some of its bets are likely to be included in the dreaded list of those who should be junked by voters.

Arguelles acknowledged that, right now, there is no such thing as a Catholic vote. One thing is sure, though: “What we are trying to do is to make it” in Batangas. And the groundwork being laid down now can come in handy for the 2016 presidential polls.

As pastor, Arguelles said, he is in the background. “[The Catholic vote initiative] came from ordinary people who think we do not encourage them enough. They really want to unite.”

Guinhawa said that if they are able to pull down the anti-Church candidates, “then that is [already] a win for us.” While their chosen ones might not make the winning circle, affecting the overall outcome of the senatorial race is enough victory.

“Because they allege that there is no such thing as a Catholic vote,” Guinhawa said, “but we would like to make them feel that they are starting to lose something and that we are unified.” – Rappler.com