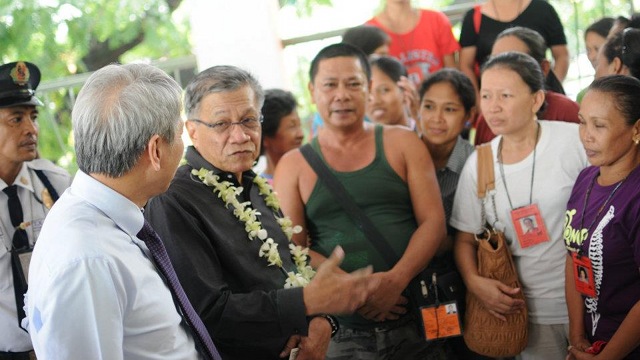 MANILA, Philippines – In what could be a test case, activists on Monday, April 1, asked the Commission on Elections (Comelec) to disqualify party-list group Akbayan over a newspaper column by its top nominee.

The activists, who come from the groups Anakbayan, Kabataang Artista para sa Tunay na Kalayaan, and the League of Filipino Students, also asked the Comelec to disqualify Akbayan over illegal posters.

Comelec Resolution No. 9615, which tackles campaign rules, requires mass media columnists running for party-list seats to “be deemed resigned, if so required by their employer” or to “take a leave of absence from his/her work as such during the campaign period.”

“With the continuing publication of his online column, it appears thus that Akbayan party-list nominee and Rep Walden Bello had failed to file a leave of absence from his work as Inquirer.net columnist during the campaign period of the electoral campaign,” the complainants said.

They also noted that on March 7 and March 21, his column ended with this line: “Inquirer.net columnist Walden Bello represents Akbayan (Citizens' Action Party) in the House of Representatives.”

They said that aside from disqualifying Akbayan, the Comelec should also file election offenses against the party-list group over these.

Rappler could not reach Bello, Akbayan's first nominee, as of posting time.

In a phone interview with Rappler, Akbayan spokesman Barry Gutierrez said his party has not read the fresh complaint.

Gutierrez, however, cast doubt on whether Bello violated the law by continuing to publish an Inquirer.net column.

“If in the view of the Comelec, that was a violation, they should have sent a notice,” Gutierrez said in a mix of English and Filipino.

He also said the Akbayan “faithfully” complied with the Comelec's notices on illegal posters.

Akbayan communications head Emman Hizon, for his part, said on Twitter: "How could an unpaid contributor take a leave of absence from PDI? Labo."

@rapplerdotcom @paterno_ii How could an unpaid contributor take a leave of absence from PDI? Labo.

Rivals in the Philippine Left, Akbayan and Anakbayan have frequently clashed, as when Anakbayan stormed an Akbayan press conference in October 2012. Anakbayan denounced Akbayan's supposed “hypocrisy” and ties to the Palace.