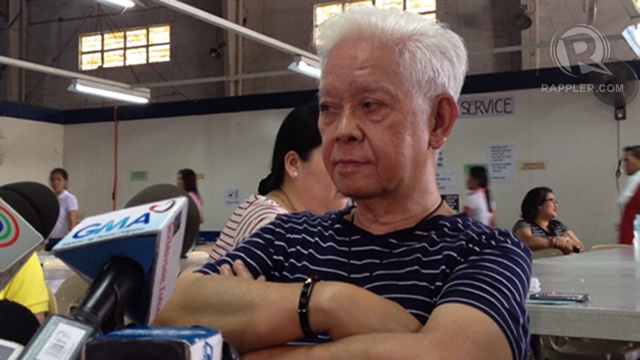 LAGUNA, Philippines (UPDATED) – Over 4 months after the Commission on Elections (Comelec) finished an unprecedented purge of party-list groups, the Supreme Court (SC) decided the poll body did its job fairly – but with a catch.

In a ruling released Friday, April 5, the SC debunked the argument the Comelec used, requiring the poll body to repeat the screening process for 54 disqualified groups that ran to the High Court. (Read: SC shakes party list in new verdict)

The SC adopted new parameters, which did not limit the party list to marginalized groups, a criterion based on a SC ruling that was, in effect, reversed. Instead, it opened the system to national and regional organizations as well.

“I don't like it that much,” said Comelec chair Sixto Brillantes Jr, the man who spearheaded the purge of party-list groups to stop the supposed bastardization of the system. (Watch more in the video below.)

In a series of tweets on Friday, Brillantes explained his "personal reservations."

This set-up effectively deprives the poor & marginalized of opportunity to have representation in Congress.

Nonetheless COMELEC will comply with the decision & conduct the evidentiary hearing ASAP to determine compliance with the new guidelines.

Despite my personal reservations, this is a good opportunity to re-open the discussion regarding the direction of our party-list system.

Thus, I urge the new Congress to reexamine the party-list law to make it more responsive to the needs of d marginalized, not of politicians.

Brillantes, however, said a consolation was that the SC didn't allow over 123 groups to run in this year's party-list race. The Comelec included only 123 party-list groups in the ballot.

“It's a good compromise decision,” said Brillantes, who spoke to reporters after a tour of the Comelec's warehouse of ballot-counting machines in Cabuyao, Laguna.

Of the 54 petitions sent back to the Comelec, only 41 of these petitioners, whose names have been included in the ballot, may run if the Comelec allows their candidacy.

For the rest, the Comelec will only have to determine if they may register under the party-list system.

Brillantes said the SC ruling was partly a loss for the Comelec.

Logistically speaking, the new SC ruling could also take its toll on the Comelec – especially because it lacks two commissioners after the Palace's initial appointees backed out.

Brillantes noted the 5-member Comelec, in the first place, will have to study the new ruling. “So it will take time,” he said, adding he couldn't give an estimate of how long the new hearings could take.

If the Comelec fails to finish the hearings before election day, May 13, the public may still vote for party-list groups with pending petitions. But if, later on, the Comelec disqualifies these groups, the poll body will not count their votes during canvassing.

The challenge after May 13, he said, is for Congress to craft a clear-cut law on the party-list system. "Hindi na natin dapat iniiwanan sa Comelec at Supreme Court," Brillantes said. (We should not leave it all to the Comelec and the Supreme Court.)

Earlier, Brillantes said the party-list system "has gone out of bounds." (Watch more in the video below.)

If Comelec's initial rulings prevailed, 2013 will see the lowest number of party-list groups that the Comelec allowed to run, at least in the past 6 years. – Rappler.com