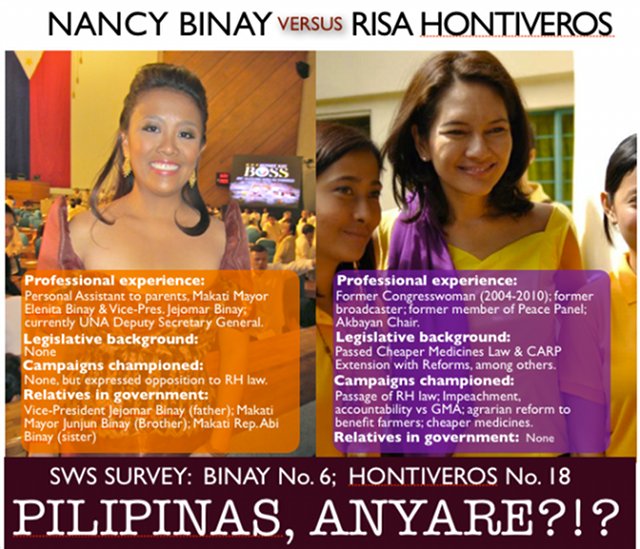 LAGUNA, Philippines - She has seen the meme comparing her to daughter of vice president Jejomar Binay, Nancy.

In it, her qualifications are pitted against the latter's, in a meme titled, "Pilipinas, Anyare? (Philippines, what happened)?"

On Friday, April 5, former Akbayan Rep and Team PNoy bet Risa Hontiveros reacted to the meme by challenging Binay to a debate.

"Kung i-call niya 'yung buyo sa amin (If she responds to the taunts), I would really welcome it because it would give me a chance to talk about my track record," Hontiveros told reporters.

Hontiveros is gunning for a Senate seat for the 2nd time. She finished 13th in the 2010 Senate race, and is trying again this time around under the President's slate. She has yet to make it to the so-called Magic 12 as reflected in surveys, despite a lengthy legislative record stemming from her 3 terms as a congresswoman. (A total of 12 senatorial seats are up for grabs in May.)

On the other hand, Binay, a candidate of the opposition United Nationalist Alliance (UNA), has continuously ranked high in surveys despite her lack of lawmaking experience. She ranked 5-7 in the latest Social Weather Stations survey.

Hontiveros clarified she had nothing to do with the meme but said she was amused by it. She also said she wishes campaigning was 50% sorties, and 50% debates to allow voters to scrutinize candidates.

In a past interview, Binay said she is open to a debate -- but after the elections.

(I guess when we're already in the Senate, we can debate because right now, what's important is for voters to hear us since they are the ones who will decide, who will vote on May 13 so our concentration for now are sorties. We can debate on the Senate floor, let us just debate there)

Binay was a last-minute addition to the opposition ticket after Joey de Venecia III withdrew his candidacy. - Rappler.com