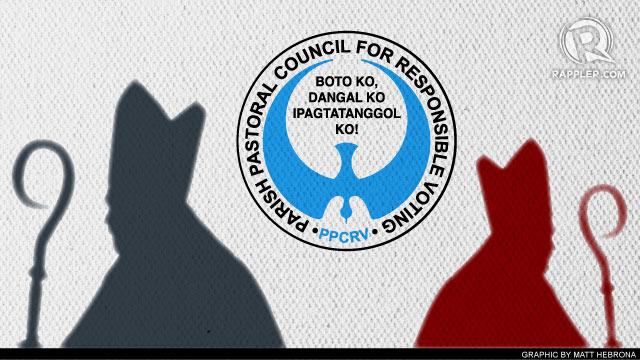 MANILA, Philippines – The May 2013 elections is turning out to be a polarizing event for leaders of the Catholic Church.

Bishops are divided on whether to continue supporting the Church-based Parish Pastoral Council for Responsible Voting (PPCRV) amid growing disenchantment with the election watchdog.

Doubts about Henrietta “Tita” de Villa, PPCRV chair, have lingered since 2010, when she sat in the advisory council for country’s first nationwide automated polls. For partnering with the Commission on Elections (Comelec) and vote counting machines supplier Smartmatic, De Villa, in the eyes of some prelates, was “co-opted” and has compromised PPRCV’s status as a nonpartisan poll watchdog.

It did not help that De Villa has been a vocal supporter of the automated polls, despite concerns from some Church leaders that it is vulnerable to high-tech forms of cheating.

This did not prevent Lipa Archbishop Ramon Arguelles from breaking ties with the PPCRV. He raised questions about its credibility and integrity.

Arguelles added that more bishops are expected to follow suit, in a move that could further hurt PPRCV’s ground operations.

De Villa, in an interview with Comelec reporters on Friday, April 5, said she had explained PPCRV’s side to the bishop. She can only respect the bishop’s decision to still withdraw its support, and she is “leaving it all up to God.”

In the same interview, during a visit to the Comelec warehouse in Laguna, Comelec chair Sixto Brillantes Jr revealed that Arguelles wrote him, seeking a separate accreditation for the Diocese of Lipa to be a citizen's arm. The prelate was told that the accreditation period had ended and they can just partner with the two other approved groups, Namfrel and One Vote.

The CBCP as a whole has been wary of the supposed lack of transparency in the automated election. The collegial body reiterated this in its pastoral letter in January this year.

The CBCP warned that questions on the precinct count optical scan (PCOS) machines, “if not properly addressed, the present automated election system can lead to wholesale cheating. The integrity of a pillar of our democracy—the election—is at stake.”

Amid the CBCP criticism, PPRCV has opted to remain uncritical of the automated polls.

Its “territorial war” with the National Citizens’ Movement for Free Elections (Namfrel) over election duties also did not help PPRCV’s shaky position with some of the bishops.

A source from Namfrel said Manila bishop Broderick Pabillo had sought to broker talks between Namfrel and PPCRV to delineate and clarify the two election watchdogs’ duties. Twice, Pabillo invited Namfrel and PPRCV to a meeting; twice, De Villa did not attend and did not give a reason.

The twin snub was enough for Pabillo to drop PPCRV.

On March 15, Pabillo said the National Secretariat for Social Action, Justice, and Peace (Nassa) is severing its ties with PPRCV, and is shifting its support to Namfrel and Lente, also an election watchdog.

“We now declare our support to Namfrel and Lente as they generally respect and work hard to establish coordination and good partnership with Nassa and social action network during election,” said Pabillo, who chairs Nassa. The decision was backed by the executive committee.

Nassa is the social arm of the CBCP and has control of the social action centers in parishes, which both PPCRV and Namfrel rely on for manpower during elections. Other prelates who are Nassa officials are Archbishops Antonio Ledesma and John Du and Bishops Emmanuel Trance, Leopoldo Tumulak, and Vicente Navarra.

Still, recognizing the autonomous nature of the dioceses, Pabillo said it is up to the individual bishops whether they would still support PPCRV since his position was only recommendatory.

It is also a double edged sword. Those bishops who are still willing to back PPCRV can no longer expect financial support from Nassa for this year’s election operational expenses . Nassa provides subsidies to the social action centers of the dioceses.

De Villa, for her part, said that as far as she knew, only Arguelles was withdrawing support from her organization. It’s “business as usual for PPCRV,” since “none of the other dioceses have severed ties with us,” she said in Filipino.

‘Sleeping with the enemy’

But PPRCV’s woes do not end there.

On March 26, an open letter issued by 16 civil society organizations cited the PPRCV leadership’s “betrayal of public trust” and asked the Church to disassociate itself from the poll watchdog.

The group, which included Konsensyang Pilipino of former Senate President Jovito Salonga and EarthSavers Movement of Cecille Guidote-Alvarez, demanded that De Villa resign from PPCRV for compromising the reputation of the watchdog.

The group took De Villa to task for acting as lapdog, instead of a watchdog, of the Comelec and Smartmatic during the conduct of the 2010 polls.

In particular, the group questioned De Villa’s supposed complicity with Comelec and Smartmatic in denying access to the random manual audit for the 2010 polls which have never been made public.

They also raised questioned PPCRV for supporting Comelec’s purchase of the PCOS machines from Smartmatic to be used for the 2013 polls. The move “was patently contrary to the position taken by civil society and IT experts, particularly Archbishop Fernando Capalla and Pabillo,” both of whom signed petitions against Comelec and Smartmatic.

What took the cake was De Villa’s move to tap former Comelec Commissioner Gregorio Larrazabal as PPCRV vice chairman for external affairs, the group said. As poll commissioner, Larrazabal was on top of the automation project in 2010.

“The mandate to be the watchdog to ensure, clean, hones and accurate and meaningful election is a moral mission. The transgression of the impartiality, non-bias and non-partisanship of that mission invalidates the PPCRV raison d’être,” the group said.

Palma to the rescue

Responding on the civil society’s open letter, Archbishop Palma said that despite his concerns on the PCOS machines and the conduct of the 2013 elections, he still supports PPCRV as a citizen arm.

“I recognize in PPCRV leadership the same desire to be of service to our people by working for clean, honest, accurate and meaningful elections,” Palma said.

He stressed, however, that he is only speaking only on his behalf as “unless we gather as a plenum or as members of the permanent council or as regional representatives, I could not speak on behalf o the body.”

This week, Arguelles announced that the Lipa archdiocese is cutting its ties with PPCRV due to nagging questions on its credibility. “We cannot rely anymore on the present PPCRV since some of their leaders used to be Comelec people with a reputation that is questionable. There seem to be personal interest in the leadership,” apparently referring to Larrazabal.

As for De Villa, Arguelles said, “for some reason, we are no longer sure if she is objective.”

Malolos Bishop Jose Oliveros, in a separate interview, said some bishops have issues about the automated elections that PPCRV and Comelec have failed to address. These include transparency in the results, as well as flaws and defects in the PCOS machines, which can taint the outcome of elections.

For instance, he said, Comelec has not been able to explain why Bulacan province had the most number of reports about defective PCOS machines during the 2010 polls.

Still, Oliveros said he will continue to support PPRCV while respecting Arguelles decision to sever ties with the poll watchdog. “That was his assessment and I respect that.” – Rappler.com