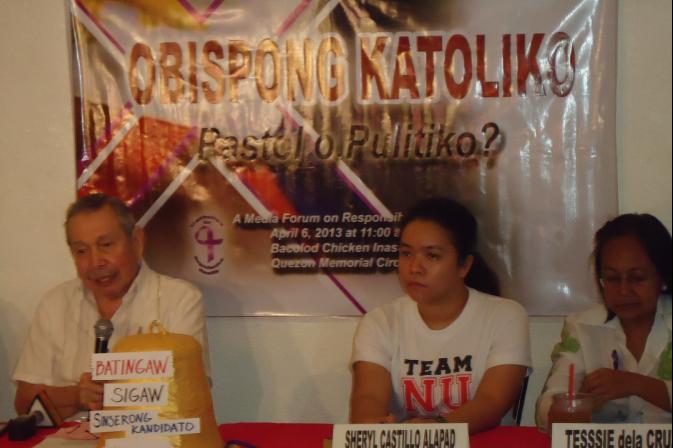 MANILA, Philippines - A day before the Catholic charismatic group El Shaddai is set to endorse senatorial bets in the 2013 polls, a group of Catholics decried this act as "insulting" to the intelligence of members of the Church.

"Imbes na (Instead of) providing for criteria and responsible critical voting, they are actually imposing their position," said Bicbic Chua, executive director of Catholics for Reproductive Health (CRH).

"If they sincerly believe that people have the capacity, given the right information to make the right decision, they should know that demonizing candidates who are pro-RH is a big disrespect and very unbecoming as church leaders," she added.

The Catholics' group said they would not follow suit in using one issue as a criterion in picking candidates, unlike the members of the clergy supporting El Shaddai's "unity vote."

CRH said that they are not even endorsing candidates who supported the passing of the Reproductive Health Law.

CRH chairperson Alberto Romualdez said the Catholic Church is also a kind of bureaucracy where the dynamics are not different from "office politics."

CRH believes that they can bring Catholics in full harmony with their faith and their reproductive right. "Imposing the leaders' will and demanding blind obedience are the most convenient ways to make people follow their wishes," the group said in a statement. - Rappler.com