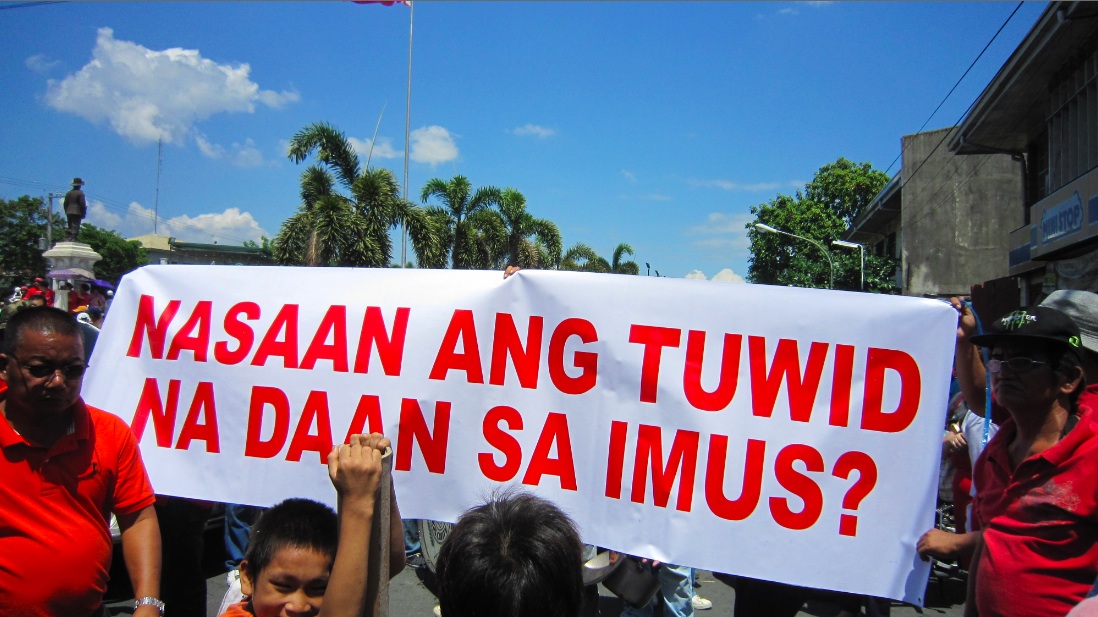 WAITING FOR MAYOR. Supporters of Homer Saquilayan during his Supreme Court-ordered reinstatement that the DIlG tried to delay on March 18, 2013. Photo by Mark Libanan

MANILA, Philippines – If the Supreme Court cannot make up its mind on who is the rightful mayor of Imus, Cavite, then the voters should – on May 13.

Poll chief Sixto Brillantes Jr made the suggestion on Friday, April 12, a day after a flip-flopping Supreme Court remanded to the Commission on Elections (Comelec) the protest case filed by Emmanuel Maliksi of the Liberal Party (LP) against Homer Saquilayan of the Nacionalista Party (NP).

Maliksi and Saquilayan are once more facing off for the position of Imus mayor in the mid-term elections. It is a one-on-one race between the two.

“Hayaan mo na ang tao ng Imus ang mag-decide,” Brillantes said. (Let the people of Imus decide.)
In September last year, the Comelec en banc already decided this case, unanimously voting that Saquilayan won the 2010 mayoral race in Imus, with a lead of more than 8,000 votes over Maliksi.
Maliksi elevated the case to the Supreme Court, which issued a temporary restraining order on the Comelec decision to re-install Saquilayan. Last March, after taking up the merits of the case for the first time, the high court voted 8-7 to declare Saquilayan the winner and ordered the Comelec to immediately reinstate him.
However, Maliksi has refused to leave the Imus city hall since, saying he would wait for the court to decide on his motion for reconsideration. Last Thursday, April 11, the SC voted 8-7 to grant Maliksi's motion and remanded the case to the Comelec.

In an interview on the ABS-CBN News Channel on Thursday, Maliksi said the SC's 8-7 decision made it "very clear" that he was the winner in 2010. Court spokesman Theodore Te clarified later, however, that the SC decision didn't say Maliksi was the winner but only returned the case to the Comelec.

'Comelec did nothing wrong'

Despite the recent SC ruling, Brillantes stood firmly by the Comelec's earlier decision to unseat Maliksi.

(We didn't do anything wrong, I think. I don't want to say the Supreme Court made a mistake, because they're not supposed to make mistakes. No doubt, they're higher than us, but I don't believe we erred.)

He said the SC's 8-7 decision shows it was not "clear cut." He contrasted this with the Comelec's "consistent" decisions.

Nevertheless, Brillantes said the Comelec will comply with the SC ruling, including the order to decrypt the printed ballot images. This means looking into the original ballot images originally captured by the counting machines, to clear allegations of cheating.

He said this "will take time," however, and might spill over to election day, thus the suggestion that the case “should really be thrown to the people of Imus.” – Paterno Esmaquel II/Rappler.com