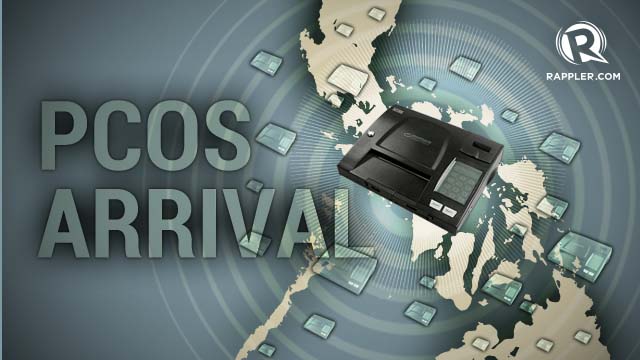 BACOLOD CITY, Philippines – All the 2,044 precinct count optical scan (PCOS) machines intended for Negros Occidental are all accounted for, according to provincial Commission on Elections (Comelec) officer-in-charge Wil Arceno.

Arceno gave the assurances after the poll body’s offices in neighboring provinces – Negros Oriental and Siquijor – reported that 266 of the PCOS that were expected to arrive earlier were missing. (According to the latest report, the 266 PCOS machines have arrived in Dumaguete City. – ed.)

Since March, 77,829 vote counting machines have been dispatched from the Comelec warehouse in Cabuyao, Laguna, to the 80 provinces across the country.

Arceno said the newly-arrived PCOS machines for Negros Ocidental, are now stored in a warehouse here in Bacolod City.

The ballots, meanwhile, are expected to arrive in Negros Occidental during the weekend.

Chief Supt Agrimero Cruz, regional police director of Western Visayas, said they have enough personnel to secure the transport of PCOS machines and ballots from the city and town halls to polling centers in Western Visayas.

Cruz said at least two police uniformed personnel will be detailed as security in the transport of PCOs and ballots, two days before the election day.

The police will also be tapping members of the Barangay Peacekeeping Action Teams and barangay tanods for area security and monitoring. The Philippine Army will provide area security during the transport of PCOS units and ballots in areas with inaccessible areas.

The National Grid Corporation of the Philippines has also given assurances that there will be no blackouts during the election week. Phyle Anthony Dusaban, NGCP Enginering Security Officer for Western Visayas, said there is enough power supply allocation for Western Visayas and an additional load is expected for the May 13 polls.

Senior Supt Ricardo de la Paz, provincial police officer-in-charge, said the 13 towns and cities included in the election watchlist will be given priority in the deployment of more government troops in Negros Occidental. – Rappler.com